Nili Fossae caught the attention of astronomers in the last century, when Mars could only be observed from Earth with ground-based telescopes. The grabens of Nili Fossae extend for several hundred kilometres along the eastern edge of the giant impact basin Isidis Planitia and, together with the volcanic region Syrtis Major, they form a concentric pattern that runs parallel to the edge of the basin. Instruments on board current Mars orbiters have revealed a very varied and unusual mineralogy. The views shown here were created by the Planetary Sciences and Remote Sensing group at Freie Universität Berlin. The systematic processing of the HRSC image data is carried out at DLR Institute of Planetary Research Berlin-Adlershof. 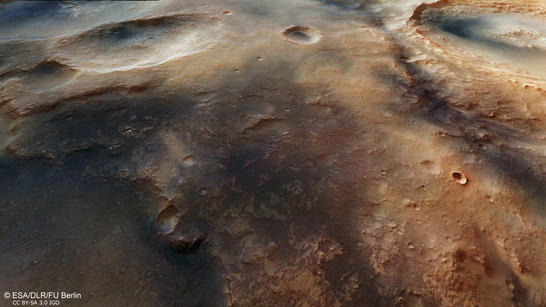 The area shown in the images is located at 75 degrees east and 24 degrees north, northwest of Isidis Planitia, a basin roughly 1500 kilometres in diameter. Isidis Planitia was the intended landing site of the Mars Express lander Beagle 2, whose whereabouts were unknown following its separation from the orbiter on 19 December 2003. Beagle 2 was due to land on 25 December 2003, but it never sent a radio signal to its mother spacecraft. Only now has the missing lander been located in images acquired by NASA's Mars Reconnaissance Orbiter. In these images, it is possible to see that Beagle 2 did not crash on the surface, as two or even three of its solar panels have deployed. Isidis Planitia is characterized by intensive volcanism during Mars' early history. In addition, sediments are thought to have been deposited from former river valleys and transported by water flowing into depressions in the basin.

The Nili Fossae graben system is characterised by its semi-circular curve around the edge of the impact basin (see image context map), which implies that these are rifts that occurred as a result of tensile stress caused by settlement in the Martian crust following the Isidis impact. When the multi-kilometre deep basin was pushed downwards even further by the load of massive, iron-rich lava deposits, the edge of the crater was subjected to severe tensile stress and the crust cracked. Similar stress ruptures can be seen on the opposite side of the impact basin, at Amenthes Fossae, which is a counterpart to Nili Fossae.

The curved rift located furthest to the east, with a width of around 20 kilometres and a depth of 1000 metres, is partially visible in these images. The slopes that mark the edge of the valley are steep in places and have a box-like profile. In some locations, layering can be seen in the rock on the slopes. The region of Nili Fossae is of interest, not just due to its highly varied mineralogy - which includes clay minerals (phyllosilicates, which have water molecules embedded into their crystal structure), carbonates comparable to lime and opaline silica, and amorphous silicates - but also because of its increased concentration of the trace gas methane, which was detected from Earth via telescopic observations.

Methane is a hydrocarbon molecule that is stable for only a short time. If it occurs in a higher concentration, this could be evidence of a source that is releasing fresh methane into the atmosphere. Such a source might be residual volcanic activity in the Martian crust. However, methane is also produced biologically, as a metabolic product of organisms. A biological origin for the methane on Mars is speculation, but ultimately it cannot be excluded.

The many different minerals that have been identified in this region have made Nili Fossae an important target for spectrometry observations from orbit in recent years. These have been carried out using the two NASA spacecraft, Mars Odyssey (THEMIS [Thermal Emission Imaging System] instrument) and the Mars Reconnaissance Orbiter (CRISM [Compact Reconnaissance Imaging Spectrometer for Mars] instrument), as well as Mars Express (OMEGA [Visible and Infrared Mineralogical Mapping Spectrometer] instrument). Over the course of Martian history, the minerals present in the original rock have been repeatedly converted through the effects of water. It is thought that this water did not just flow across the surface of Mars, but was also active in the form of volcanically heated hydrothermal solutions in caverns beneath the surface, where it circulated through fissures.

The plateau is marked by numerous depressions, many of which are associated with the main graben. They are reminiscent of valleys with regressive erosion (also known as 'sapping valleys'). The regressive erosion in such valleys is caused by ground water that is escaping under the edge of the terrain at the upstream end of the valley. The cavities formed as a result collapse and the eroded material is carried away by water flowing along the course of the valley. In this way, the source of the water slowly cuts into the existing plateau as the valley gets longer and longer

In the right half of the three overhead view images, a large impact crater with a diameter of 55 kilometres can be seen; in its centre is a 200-metre-deep pit. A ring of material that appears to have come from this depression surrounds it. Scientists believe that water or ice in the Martian crust was suddenly heated and evaporated by the massive energy of an asteroid impact (which reached its peak at this point). The heated water expanded and caused an underground explosion that burst upwards through the surface. This destroyed the crust and even broke through it in places, causing the pit. A large quantity of the disturbed rock was thrown upwards and subsequently redeposited nearby.

The image was acquired by the HRSC on 16.10.2014 during Mars Express Orbits 13699 24 degrees north and 75 degrees east. The ground resolution is about 18 metres per pixel. The color image (image 2) was created using data from the nadir channel, the field of view of which is aligned perpendicular to the surface of Mars, and the color channels of the HRSC. The oblique perspective view (image 1) was generated using data from the HRSC stereo channels. The anaglyph (image 4), which provides a three-dimensional view of the landscape when viewed using red-green or red-blue glasses, was derived from data acquired by the nadir channel and one stereo channel. The color-coded topographic view (image 3) is based on a digital terrain model of the region, from which the topography of the landscape can be derived.