Previously, images of Mars were available in strip format – strip by strip carefully flown with the European Mars Express spacecraft and processed into three-dimensional terrain models and perspective images. Now planetary scientists of the  German Aerospace Center (Deutsches Zentrum für Luft- und Raumfahrt; DLR), the Freie Universität Berlin and University of Hanover have, for the first time, joined these individual 50 to 100 kilometre wide strips to create a single large-scale map. The first mosaic comprises 2.3 million square kilometres of the surface, and covers the vast crater-strewn highland region of the Red Planet, parts of the Ares Vallis outflow channel, the chaotic Aram Chaos region as well as Meridiani Planum. Data mosaicking of the Mars-colored view (image 2) was done by members of our HRSC working group (see Michael et al. 2015), where the processing includes also a photometric correction (see Walter et al. 2015). 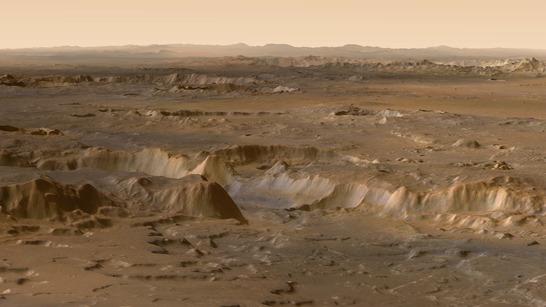 The shown products are details of larger mosaic displays presented this week at the „European Geosciences Union General Assembly 2015“ in Vienna. The mosaic extends over 1800 kilometres from north to south and 1300 kilometres from east to west. Individual stereo and colour images from a total of 89 Martian orbits were combined to create this product. 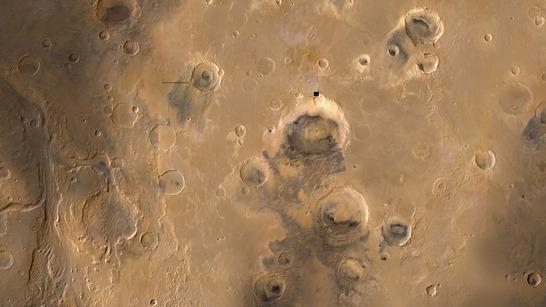 "The strips were recorded at varying resolutions, with the Sun at different positions and under varying weather conditions. The challenge was to combine them uniformly and without visible borders to form one large image," Ralf Jaumann, a DLR planetary scientist and Principal Investigator of the High Resolution Stereo Camera (HRSC), explains. For this, the geometric relationships of the individual images to one another and their geographical position must be determined with high precision. In doing so, it is possible to measure Mars accurately and globally. 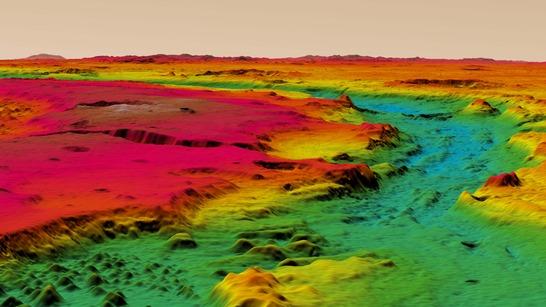 The data for this wide-area topography of Mars was acquired with the HRSC, which has been orbiting the Red Planet together with Mars Express since 25 December 2003. Nine sensors record the surface of the planet from different angles and make it possible to map our planetary neighbour at high resolution, in colour, and in the third dimension – elevation. Coverage of 70 percent of the Martian surface with image resolutions of 10 to 20 metres is being used for the highest precision 3D mapping. Additional datasets will continue to be recorded and analysed. About 97 percent of the planet has been recorded with image resolutions of up to 100 metres. By around 2018, the team from DLR, FU Berlin and University of Hanover wants to represent the whole of Mars as one coherent mosaic. 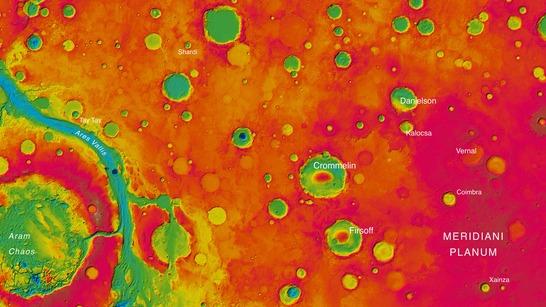 HRSC was developed at DLR and built in collaboration with partners in industry (EADS Astrium, Lewicki Microelectronic GmbH and Jena-Optronik GmbH). The science team, which is headed by Principal Investigator (PI) Ralf Jaumann, consists of 52 co-investigators from 34 institutions in 11 countries. The camera is operated by the DLR Institute of Planetary Research in Berlin-Adlershof.