Was the north of Mars once covered by an ocean?

These images, acquired by the High Resolution Stereo Camera (HRSC) on board ESA’s Mars Express spacecraft, show a region close to Cydonia Mensae in the northern hemisphere of Mars. Some of the geological formations suggest the existence of standing water, lakes or even an ocean here for an extended period of time. The views shown here were created by the Planetary Sciences and Remote Sensing group at Freie Universität Berlin. The systematic processing of the HRSC image data is carried out at DLR Institute of Planetary Research Berlin-Adlershof. 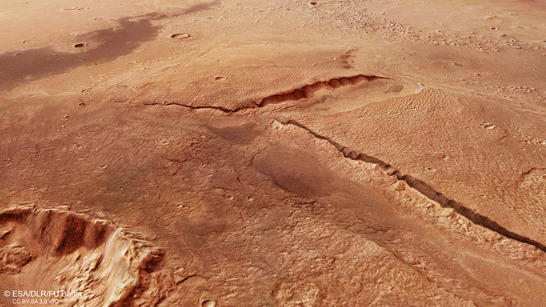 One of the most striking features of Mars is its topographical dichotomy, with a northern region of lowland plains and a higher southern upland with numerous impact craters. The processes that have led to this are still not fully understood. One theory suggests that the northern hemisphere of Mars was struck by a planetoid over four billion years ago, which blasted away the young crust that had recently solidified and part of the underlying mantle.

The transition from the highlands to the lowlands follows a narrow, geologically varied zone referred to as the 'dichotomy boundary'. Here, erosion caused by flowing water, wind, ice and ground water has created a striking landscape of rugged escarpment outliers, deeply cut valleys and smaller hills. The Cydonia region lies slightly to the north of the dichotomy boundary, within the plain Acidalia Planitia. There are numerous mesa-like structures and smaller flat-topped mountains here – the remains of an eroded highland are distributed over large parts of this region. Some planetary researchers believe that parts of these northern lowland plains were once the bed of an ocean or of lakes, which were then covered by layers of lava or sedimentary deposits several hundreds of meters deep. This layer was subsequently removed by erosion. Water again played a role in this. 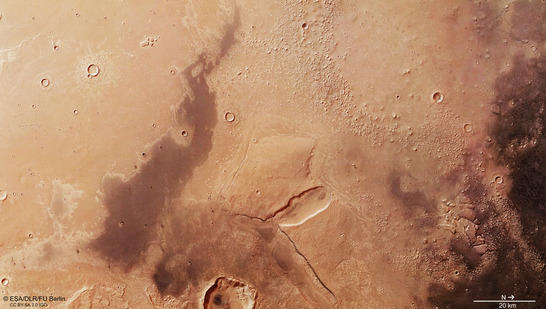 Today, many examples of the remains of the layer can be seen in this region; the mountains and hills have flattened summits topped with hard, erosion-resistant layers. In the majority of cases, these topmost layers have a higher density of impact craters, indicating that they are older than the less cratered plains that surround them, and so were once part of a huge, continuous southern upland region. It is also possible that the underlying layers were compacted by an earlier, large asteroid impact on this plain and so resisted erosion for longer.

The topographical view (image 3) clearly shows the difference in altitude between the southern highlands (left in the image) and the northern lowlands (right). In the centre of the image there are two large mesas around 500 metres high and some 20 kilometres long, making them six times as large as the famous 1000-metre-high Table Mountain near Cape Town in South Africa. The two mountains once formed a contiguous massif but are now separated by an oval valley. The surface of the mesas differs greatly from their surroundings, indicating that the uppermost layer covering the mountains consists of a different material. In addition, on the southern side of the left-hand mesa, there is a small outflow channel.

Slightly below the centre of the image is a 15-kilometre-wide crater surrounded by a very typical double layer of material, which was formed as a result of the impact. The inner layer of crater ejecta is covered over by the larger layer that stretches out much further. This shape is particularly interesting, as it is suspected that this special type of ejecta blanket is only caused by impacts into water- or ice-rich material. In these HRSC images, it looks as if the impact might have blasted away parts of the formerly contiguous mesa. 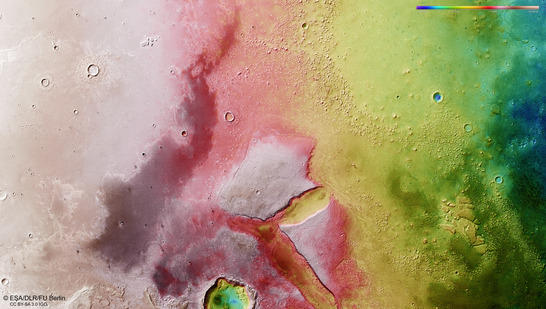 The supposed 'face on Mars'

The Cydonia region achieved fame because of an image acquired by the Viking 1 probe on 25 July 1976 while looking for a suitable site for its lander. It showed a mountain massif that looks like a three-kilometer-long face due to a series of terrain features and the specific angle of the shadows at the time the image was acquired. All of the Mars researchers at the time believed it was an optical illusion. The HRSC camera captured the face on (Cydonia orbit 3253), and the images were published in September 2006. In these images it is easy to see that the mountain massif no longer looks like a face with eyes and a mouth when imaged from a different angle and under different lighting conditions, but is actually an eroded mesa, of which there are hundreds in this area. 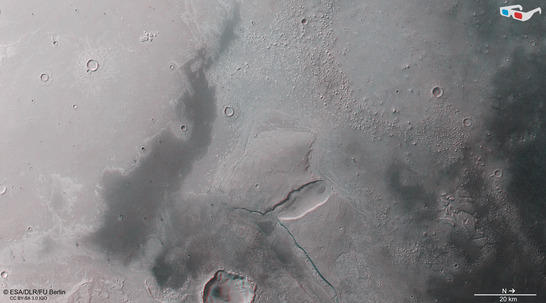 The image was acquired by the HRSC on November 19, 2014 during Mars Express orbit 13,816 at 38 degrees north and 353 degrees east. The ground resolution is about 15 metres per pixel. The color image (image 2) was created using data from the nadir channel, the field of view of which is aligned perpendicular to the surface of Mars, and the color channels of the HRSC. The oblique perspective view (image 1) was generated using data from the HRSC stereo channels. The anaglyph (image 4), which provides a three-dimensional view of the landscape when viewed using red-green or red-blue glasses, was derived from data acquired by the nadir channel and one stereo channel. The color-coded topographic view (image 3) is based on a digital terrain model of the region, from which the topography of the landscape can be derived.