This color mosaic of Saturn`s icy moon Tethys shows a range of features and color variations on the moon's trailing hemisphere. The mosaic, whose image data were taken a few months ago, was compiled by our planetology research group at Freie Universität Berlin and recently published in a press release of the NASA/JPL-Photojournal. 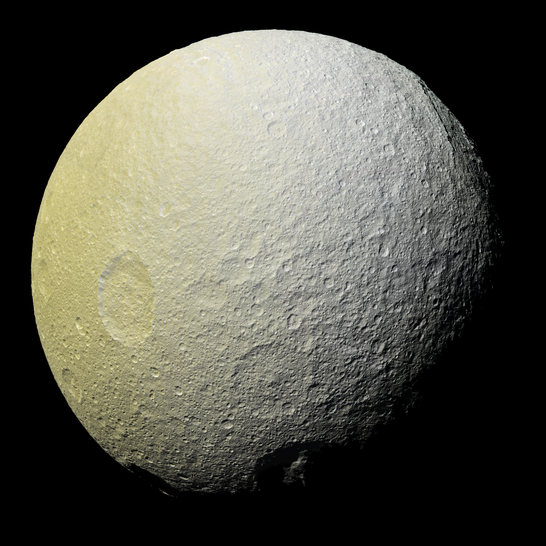 Quite obvious at global scale is the yellowish color of the surface to the left, compared to the whitish color near the center and to the right. The probable reason for this are small icy dust grains which were ejected from the Saturnian moon Enceladus and which preferentially hit the leading side of Tethys, coloring it white.

This observation triggered a late re-design of Cassinis future observation plans. In mid-November, Cassini will now observe again such a red deposit from a distance of less than 10,000 km.

With a diameter of 1,062 km, Tethys is the fifth-largest moon of Saturn. Its low density suggests that the moon is primarily composed of water ice. The surface is heavily cratered, in some areas more than in others. The most prominent surface features are the Odysseus impact basin, measuring 445 km in diameter (nearly half of the moon´s diameter) and the Ithaca Chasma graben system, showing a width of 65 to 100 km and depth up to 5 km, covering large parts of Tethys. Tethys was already discovered in 1684 by the French astronomer Jean-Dominique Cassini and named after the Titaness Tethys from the Greek mythology.

The image data were acquired on April 11, 2015 during sequence S88 with the Imaging Science-Subsystem (ISS) on board the Cassini spacecraft. Because the moon's surface is fairly uniform in natural colors, clear, green, infrared and ultraviolet spectral filters were combined to make the view of subtle color differences across Tethys surface visible to the human eye.

The systematic processing of the data and the production of the image products shown here were carried out by staff members of the Planetary Sciences and Remote Sensing Group of the Freie Universität Berlin. This mosaic is an orthographic projection constructed from 52 Cassini images, which were obtained at a distance of approximately 33,000 miles (53,000 km) from Tethys. Resolution is about 1,000 feet (300 m) per pixel.

The international Cassini-Huygens mission is a joint project of NASA, ESA and ASI, the Italian Space Agency aimed at the exploration of the Saturnian system. The Cassini spacecraft explores the planet and its moons since its arrival in Saturn´s orbit 2004. Huygens, the landing capsule built by ESA, has been the first European contribution to a space mission to the Outer Solar System. The Jet Propulsion Laboratory (JPL) at the California Institute of Technology in Pasadena manages the mission for NASA's Science Mission Directorate. The Cassini orbiter and its two onboard cameras were designed, developed and assembled at JPL. The imaging operations center is based at the Space Science Institute in Boulder, Colorado.

Further information about the Cassini-Huygens Mission can be found on our webpages, on the webpages of NASA http://saturn.jpl.nasa.gov and http://www.nasa.gov/cassini and on the homepage of the Cassini Imaging Team http://ciclops.org.