The image, acquired by the High Resolution Stereo Camera (HRSC), which was developed and is operated by the German Aerospace Centre (Deutsches Zentrum für Luft- und Raumfahrt; DLR) and carried on board ESA’s Mars Express spacecraft, shows a portion of Aurorae Chaos, part of the prolongation of the giant Valles Marineris graben system. The views shown here were created by the Planetary Sciences and Remote Sensing group at Freie Universität Berlin. The systematic processing of the HRSC image data is carried out at DLR. 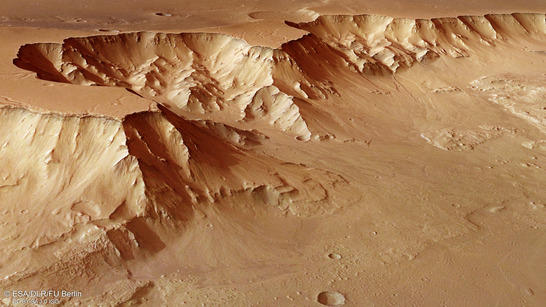 Aurorae Chaos is a very extensive 'chaotic terrain' that extends several hundred kilometres further to the east. Chaotic terrain refers to regions with dozens – or up to several hundred – small peaks and mesas. They may sometimes constitute a wild, random pattern over many thousands of square kilometres on Mars – or just have a 'chaotic' arrangement. Aurorae Chaos lies north east of the point at which the Capri Chasma and Eos Chasma valleys meet, and covers an area of roughly 700 by 400 kilometres, connecting the rift valley system of Valles Marineris with Ganges Chasma in an area a little more than half the size of Germany. Enormous quantities of water must once have flowed towards the Northern Lowlands through here and over the adjacent regions of Hydraotes Chaos and Chryse Chaos.

Landscape features indicate great masses of water in Mars' past

The transition of the collapsed regions to the south (left on Images 2, 3 and 4) towards the smoother area in the centre of the images – a part of the Ganges Chasma valley – is clearly visible in the images. The fan-shaped deposits along the slopes suggest the occurrence of mass movements down these slopes, which carried sediment and subsequently deposited it there. A little further north (right in the image) is a steep slope that is adjoined to a cratered plateau – a part of the Highlands region Xanthe Terra. 4800 metres separate the valley floor and the plateau – this height difference is strikingly noticeable in the 3D view and also stands out clearly in the topographical image. This is the altitude of Mont Blanc – however, when it is measured from sea level: these are dimensions on an enormous scale.

The region portrayed in the image shows numerous interesting landscape features that point to large amounts of water flowing across the Martian surface in the past. Chaotic terrains are believed to have developed by collapse, triggered by the sudden release of water released when giant subterranean ice reservoirs melt. The source of the heat could be nearby volcanoes or an asteroid impact. If the water drains away, the surface falls over the newly formed cavities and the landscape collapses onto itself. A close look at the topographic map reveals that the high plateaus to the north and south of Aurorae Chaos are approximately the same height. The southern plateau (top left in the plan views) shows a field of mountains with rounded peaks,  a small, chaotic terrain located several thousand metres up as well as numerous buttes smaller than those in the valley and that have not been worn by erosion. The northern plateau does not show traces of an eroded landscape. Here, we can see some smaller branching channels on the surface. Therefore, water was possible present in the subsoil in the south but not in the north.

In the centre of the image, a group of remnant buttes in the midst of the low-lying valley shows a stair-shaped morphology, as do some of the fan-shaped deposits in the north. This could be an indication that different water or ice levels once existed in this area. Also notable are the two faults that cut through a collapsed block (visible in the top centre of the images). Referring again to the topographical map, the faults appear to cut through the southern plateau (top left corner of the images). They could be the result of a later occurring tectonic event or have simple subsidence.

The image was acquired by the HRSC on July 16, 2015 during Mars Express Orbits 14,635, at 8 degrees south and 320 degrees east. The ground resolution is approximately 17 metres per pixel. The color image (image 2) was acquired using the nadir channel of the HRSC, which is directed vertically down onto the surface of Mars. The perspective oblique view (image 1) was generated using data from the HRSC stereo channels. The anaglyph image (image 4), creates a three-dimensional impression of the landscape when viewed with red/blue or red/green glasses, was derived from the nadir channel and one stereo channel. The color-coded image (image 3) is based on a digital terrain model of the region, from which the topography of the landscape can be derived.