The latest images acquired using the High Resolution Stereo Camera (HRSC) on board the ESA Mars Express spacecraft show part of the Ascuria Planum region on Mars, located at around 39 degrees north of the Martian equator and 281 degrees east. The region is transected by large numbers of linear and curvilinear normal faults and grabens with ages that span much of Mars' geologic history. The views shown here were created by the Planetary Sciences and Remote Sensing group at Freie Universität Berlin. The systematic processing of the HRSC image data is carried out at DLR. 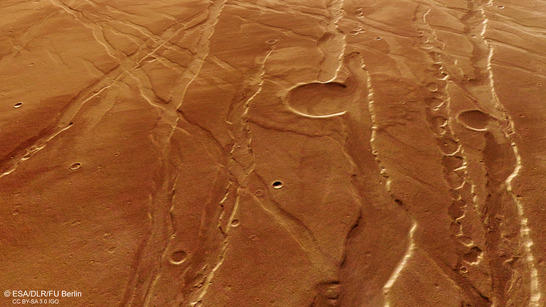 Geology is a fairly young science when compared with physics, mathematics or astronomy. Emerging from the quest for natural resources and ores, it developed into an independent field of research only in the last few centuries. In Europe, the focus of this work was in the low mountain ranges at the heart of the continent and the Alps, which is why what today is predominantly an English-language terminology adopted a large number of German technical terms to describe geological arrangements. A particularly striking example of this practice is the linguistic monstrosity 'horst and graben structures'. Numerous striking examples of these tectonic phenomena are found on Mars.

The Ascuris Planum area shown in these images is a particularly vivid case of a horst and graben landscape. The images were acquired by the High Resolution Stereo Camera (HRSC), operated by the German Aerospace Center (Deutsches Zentrum für Luft- und Raumfahrt) on board ESA's Mars Express spacecraft. Ascuris Planum is located in the northeastern area of the enormous volcanic region of Tharsis, where a large number of similar geological structures exist. The Tharsis region extends across several thousand kilometres in each direction and exhibits an approximately five-kilometre elevation in the shape of a shield that emerged over several billion years. These processes created immense expansion stresses that transformed broad swathes of the region into horst and graben landscapes.

How do horst and graben structures emerge?

Expansion in a rigid and brittle rocky crust, precipitated, for instance, by an elevation in the substratum, generates stresses in the surface immediately above. Indeed, the crust will break open if the expansion stresses rise beyond what would be a 'tolerable' threshold for the rock, producing a fault zone. Any further expansion in the crust will cause large areas of rock located along the strain fault to slide several hundred metres – or even more than one kilometre – downward. Over millions of years, this phenomenon will produce a tectonic graben. The remaining blocks that flank these structures then tower above the landscape to form the matching horsts.

The Ascuris Planum landscape possesses a large number of geological features. The volcanic phenomena are particularly interesting alongside the complex tectonic structures. Volcanic activity has been a major factor across the entire Tharsis region; Alba Mons, located to the west in the immediate vicinity of Ascuris Planum, is one of the largest volcanoes on Mars. Numerous smaller shield volcanoes are found in this area – among them is Labeatis Mons (see context map).

The faults, running in lines ranging from straight to moderately curved and that are responsible for the horst and graben landscape, are particularly eye-catching features here. Ascuris Planum is a section of the Martian crust that, over an extremely long period in the planet's history, must have been exposed to immense tectonic stress. Mostly parallel trenches scar the ground from the northeast to the southwest, although some do run crosswise to this principal alignment. This phenomenon is indicative of a change in the 'stress regime' – the name used by geologists to describe crustal tension. The borders of the grabens appear fresher and less eroded in the left-hand sections of the images (numbers 2, 3 and 4). A few solidified lava streams are visible on the highest points, which are best seen in the colour coded digital terrain model (image 3). Lava streams of this kind may have leaked along the fault lines in a manner not dissimilar to what is currently observed in some areas of the Hawaiian Islands.

The right-hand sections of the images (numbers 2, 3 and 4) show a number of parallel grabens, as well as one impact crater whose walls exhibit an opening. This means that the crater is older than the tectonic faults. Observations of this kind allow scientists – to a certain degree at least – to draw conclusions on how the geological processes unfolded over time. A series of isolated, circular depressions stretching along the fault lines and carved into the brittle and steep-walled grabens is another conspicuous feature. Here, geologists speak of subsidence crater chains. They are particularly commonplace along the flanks of flat shield volcanoes and may reveal the course of lava channels that once extended beneath the surface. The rocky roofs of the lava channels began to collapse as the streams became increasingly exhausted over time, producing this striking pattern. Phenomena of this kind are also found in a number of regions on Earth – for instance, Hawaii.

However, there are alternative explanations – entirely unrelated to volcanic activity – for these subsidence crater chains. Their assumption is that the crust expanded, producing these depressions into which rocky material eventually slipped. Groundwater may also have been a significant contributor to these structures; on Earth, these sequences of 'pits' in an otherwise intact landscape are seen predominantly in limestone hills, where they are known as sinkholes. The word describes circular depressions found, for instance, in the karstic landscapes of southeastern Europe or the Swabian Alps. They form when carbon dioxide from the air bonds with water to produce carbonic acid, which then, mixed with the surface water, corrodes the limestone to produce cave-like structures in the substrata as the leachate trickles down through the soil. Over time, the roofs over these caves gradually weaken to the point that they collapse. Although Mars does not have any limestone, there are certainly water-soluble deposits in many places – for instance in the form of sulphates – that occur most frequently in areas where water was once found.

The image was acquired by the HRSC on November 10, 2014 during Mars Express Orbits 13,785 at 39 degrees north and 281 degrees east. The ground resolution is about 18 metres per pixel. The color plan view (image 2) was created using data from the nadir channel, the field of view of which is aligned perpendicular to the surface of Mars, and the color channels of the HRSC. The oblique perspective view (image 1) was generated using data from the HRSC stereo channels. The anaglyph (image 4), which provides a three-dimensional view of the landscape when viewed using red-green or red-blue glasses, was derived from data acquired by the nadir channel and one stereo channel. The color-coded plan view (image 3) is based on a digital terrain model of the region, from which the topography of the landscape can be derived.