Mesas and wind gullies in Aeolis Mensae on Mars

The image, acquired by the High Resolution Stereo Camera (HRSC), which was developed and is operated by the German Aerospace Centre (Deutsches Zentrum für Luft- und Raumfahrt; DLR) and carried on board ESA’s Mars Express spacecraft, shows a portion of Aeolis Mensae – One of the most striking features of a global view of Mars is the dichotomy between the topographically diverse highlands in the southern hemisphere and the flat, expansive lowland plains of its northern counterpart. Many landscape features shaped by erosion can be observed in the transitional zone between the highlands and lowlands, which explains the particular geological interest in this region. The views shown here were created by the Planetary Sciences and Remote Sensing group at Freie Universität Berlin. The systematic processing of the HRSC image data is carried out at DLR. 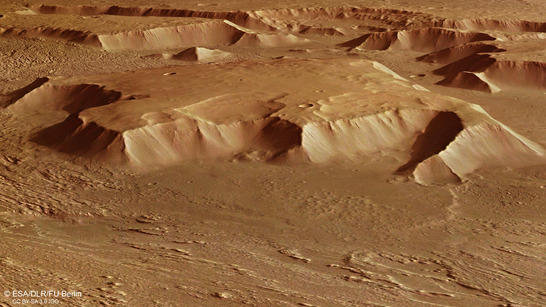 Wind and water erode the landscape

Numerous fracture zones known as tectonic grabens cross the region. Expansion of the Martian crust produced a large number of freestanding mesas (sometimes called witness buttes), the plateaus of which indicate that the highlands of Mars once extended further to the north. A large expansion fracture extends diagonally through the next image in the south of this scene, on the left-hand side of the image (north is on the right in these images). The large mesa in the centre of the image, which measures approximately 40 by 40 kilometres and rises some 2500 metres above the surrounding terrain, is a remnant of these expansion processes. Its top is at the same elevation as the adjacent Hesperia Planum highland region further to the south.

Wind, and possibly also water and ice, have eroded the landslides and weathered the rock over millions of years, so the mesas become smaller and will disappear in the distant future. In the north, in the right-hand section of images 2, 3 and 4 it becomes apparent that wind is the 'shaping force' on Mars; the landscape there shows a characteristic pattern of small ribs, referred to as yardangs. These are produced when the wind blows from a prevailing direction over a long period of time, carrying sand and particles of dust that scour 'wind gullies' into the rocky surface. The word yardang is taken from the Uyghur language, which describes steep walls of sand and wind gullies in the desert around Lop Nor.

Most of the yardangs run in a southeasterly to northwesterly direction, which is indicative of the prevailing winds in this region. A small, steep-sided rib in the terrain, extending for around 7.5 kilometres perpendicular to the main direction of the yardangs, is an eye-catching feature of this area. Quite evidently, the rib is made of harder and far more resistant rock that allows it to withstand the erosive power of the wind. It is possible that a minor expansion fracture formed transversely to the principal tectonic orientation and was then filled with molten volcanic rock that became harder than the surrounding material after solidification.

At Christmas, Mars Express will have spent 13 years in orbit

In just a few days, Mars Express will celebrate the thirteenth anniversary of its arrival at Mars. When the ESA spacecraft entered orbit around the Red Planet on Christmas Day 2002, its mission was designed to last just two Earth years (or one Martian year). But the extensive scientific yield prompted its extension on multiple occasions, most recently to the end of 2018. ESA's first planetary mission is therefore also the longest to date. HRSC has mapped approximately 90 percent of Mars' surface – equivalent to 150 million square kilometres, or approximately the area of all Earth's continents combined – with high-resolution stereo images and in colour. Image data representing around two thirds of the surface have already been rendered to produce a digital terrain model with a precision of 40 metres per pixel or better. The objective of this camera experiment is to compute a digital terrain model covering the entire surface of Mars.

The image was acquired by the HRSC on July 7, 2015 during Mars Express Orbits 14.605, at 5 degrees south and 146 degrees east. The ground resolution is approximately 15 metres per pixel. The color image (image 2) was acquired using the nadir channel of the HRSC, which is directed vertically down onto the surface of Mars. The perspective oblique view (image 1) was generated using data from the HRSC stereo channels. The anaglyph image (image 4), creates a three-dimensional impression of the landscape when viewed with red/blue or red/green glasses, was derived from the nadir channel and one stereo channel. The color-coded image (image 3) is based on a digital terrain model of the region, from which the topography of the landscape can be derived.