Black dunes on the Red Planet

These images, acquired by the High Resolution Stereo Camera (HRSC), which is developed and operated by the German Aerospace Center (Deutsches Zentrum für Luft- und Raumfahrt; DLR) and carried on board ESA’s Mars Express spacecraft, show Rabe Crater, situated in the southern highlands of Mars. A vast field of black dunes, some towering up to 200 metres high, is located at the centre of the crater, which is about 100 kilometres across. The views shown here were created by the Planetary Sciences and Remote Sensing group at Freie Universität Berlin. The systematic processing of the HRSC image data is carried out at DLR. 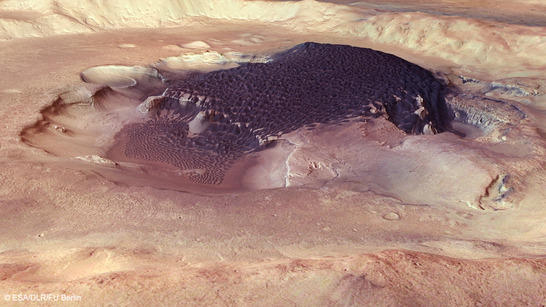 These dark dunes are composed of fine volcanic ash, which is also visible as a dark layer clinging to the sides of the depressions in the crater floor. The ash is carried out of this layer by the wind, accumulating elsewhere to produce impressive dune fields. Referred to as ‘basalt dunes’ due to their volcanic mineral composition, these formations are particularly frequent on Mars. Indeed, basalts represent the most common volcanic rock found on the Red Planet. This kind of dune is a very rare occurrence on Earth, found on Hawaii, New Zealand and Iceland, for example. They only arise where volcanic activity occurs in a dry climate. 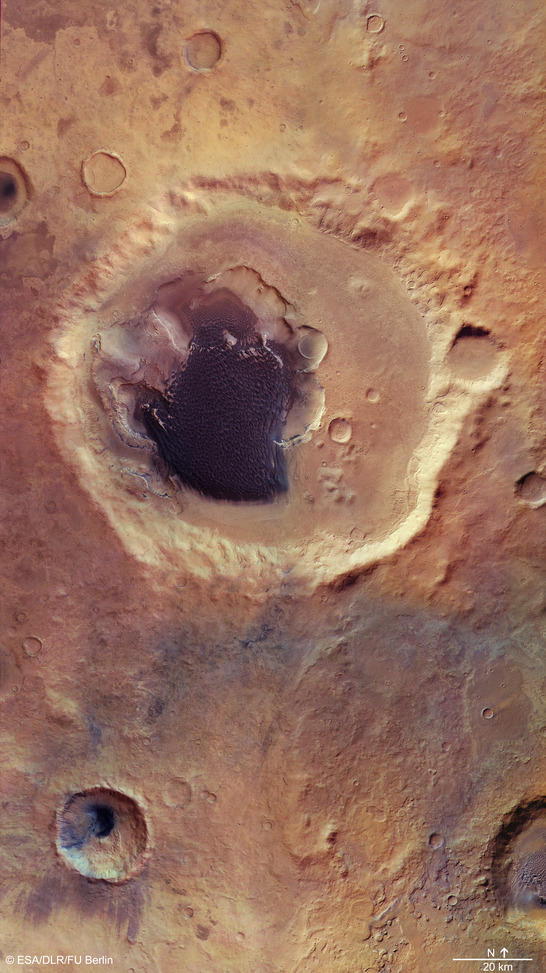 Signs of the winds in Rabe Crater

The dunes display a variety of patterns that indicate the different prevailing wind directions. Scientists determine the wind direction that produced a dune based on the orientation of the dune ridge and the upwind side of the dune. For instance, the dunes in image 1 can be seen spreading over a cliff and down into a depression; these are referred to as ‘falling dunes’. Dunes elsewhere in the field are aligned in a variety of different directions.

The dark dunes on Mars were produced in the more recent geological past, less than 100 million years ago, when the water once found on Mars had probably disappeared. This is evident from the absence of chemical weathering, that is, the oxidation of the iron-rich ash with its typical reddish discolouration – which is seen on the majority of the Martian surface.

Another unusual feature of Rabe Crater is that a large part of its floor has subsided. Of the layered sediments that once filled this crater, only a kind of table mountain remains, protruding from the floor. Its cause is yet unknown, although it may have been produced by ice that previously filled cavities beneath the crater and then melted and flowed away as water. The large, dark field of dunes formed on the plateau later on. 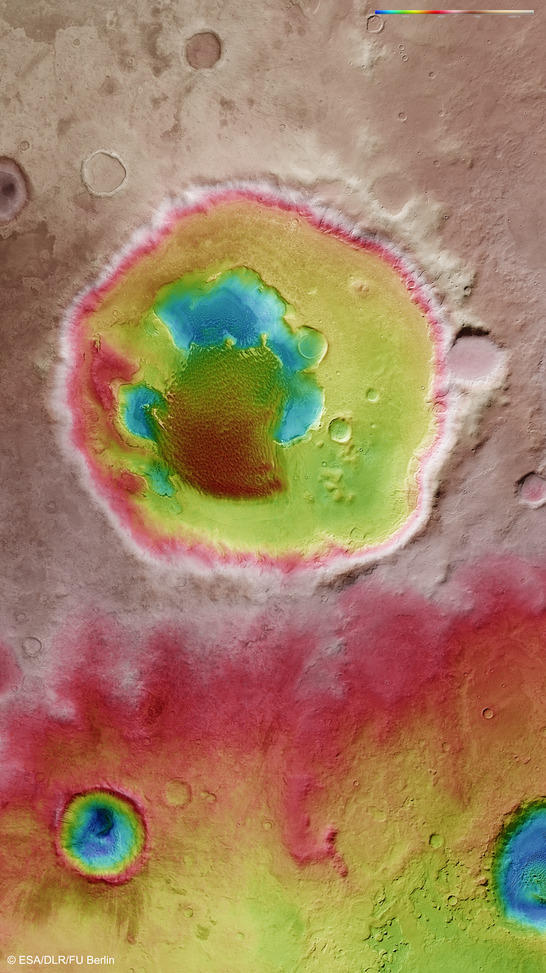 Rabe is an impact crater with a diameter of 108 kilometres. Like most craters in this region, it has a severely weathered appearance. Characteristics that define young impact craters, such as high crater walls, terraces or central mountains are no longer as pronounced or have disappeared.

Some craters in the vicinity, especially to the north of Rabe, remain visible only as outlines; the material creep occurring along slopes gradually levels the terrain. The geological process that shapes the surface in this way is referred to as ‘terrain softening’. A high concentration of ice in the substrata probably assisted this process, permitting surface material to ‘creep’ on the slippery layers of subterranean ice, even at low slope angles. Additionally, most craters in this region possess a smooth floor, as they are filled with sediment. Only one smaller, substantially younger, impact crater at the bottom left of image 3 is an exception.

The location of Rabe Crater on Mars

Rabe Crater (named after the astronomer Wilhelm Rabe, 1893-1958, former director of the Munich University Observatory in Bogenhausen) is situated roughly 320 kilometres to the west of the gigantic impact crater Hellas Planitia. Measuring 2300 kilometres in diameter and with a depth of over seven kilometres, the Hellas Basin is among the largest impact craters in the Solar System. Rabe Crater and Hellas Planitia are both located in the southern highlands of Mars, a region far older than the northern lowlands and one that therefore possesses a large number of impact craters. This topographical dichotomy is one of the most noticeable features of our neighbouring planet.

The images were acquired by the HRSC during Mars Express Orbit 12,736 and Orbit 2441 at approximately 44 degrees south and 35 degrees east. The ground resolution is about 15 metres per pixel. The color mosaic (image 2) was created using data from the nadir channel, the field of view of which is aligned perpendicular to the surface of Mars, and the color channels of the HRSC. The oblique perspective view (image 1) was generated using data from the HRSC stereo channels. The anaglyph (image 4), which provides a three-dimensional view of the landscape when viewed using red-green or red-blue glasses, was derived from data acquired by the nadir channel and one stereo channel. The color-coded topographic view (image 3) is based on a digital terrain model of the region, from which the topography of the landscape can be derived.