Images captured on 7 December 2013 by the High Resolution Stereo Camera show the central portion of Osuga Valles, which has a total length of 164 km. It is some 170 km south of Eos Chaos, which lies in the far eastern section of Valles Marineris. The HRSC camera on the european spacecraft Mars Express is operated by the German Aerospace Center (DLR), and systematic processing of the image data is carried out at DLR Institute of Planetary Research. The views shown here were created by the Planetary Sciences and Remote Sensing group at Freie Universität Berlin. 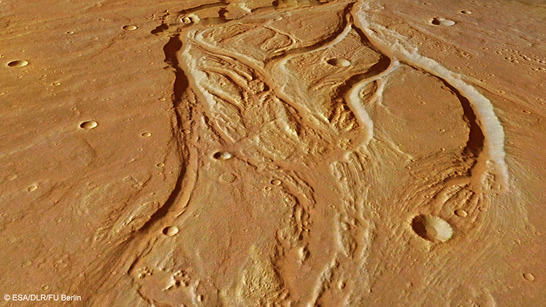 Beautiful streamlined islands and narrow gorges were carved by fast-flowing water pounding through a small, plateau region near the southeastern margin of the vast Valles Marineris canyon system. Osuga Valles is an outflow channel that emanates from a region of chaotic terrain at the edge of Eos Chaos to the west (top in the main images). Such landscape is dominated by randomly oriented and heavily eroded blocks of terrain. Another example is seen at the bottom of this scene, filling the 2.5 km-deep depression into which Osuga Valles empties.

Catastrophic flooding is thought to have created the heavily eroded Osuga Valles and the features within it. Streamlines around the islands in the valley indicate that the direction of flow was towards the northeast (bottom right in the main color, topographic and 3D images shown here) and sets of parallel, narrow grooves on the floor of the channel suggest that the water was fast flowing. Differences in elevation within the feature, along with the presence and cross-cutting relationships of channels carved onto the islands, suggest that Osuga Valles experienced several episodes of flooding. The perspective view, which is oriented with the direction of the water flow towards the top of the image, shows the details of the grooved valley floor and the channels carved into the islands more clearly.

Close to the northern-most (far right) part of the channel in the main images, two large irregular-shaped blocks appear to have broken away from the surrounding terrain, but do not seem to have experienced as much erosion as the rounded islands. The floodwater eventually emptied into the deep depression of chaotic terrain at the bottom of the main images, but it is not yet known whether the water drained away into the subsurface or formed a temporary lake. 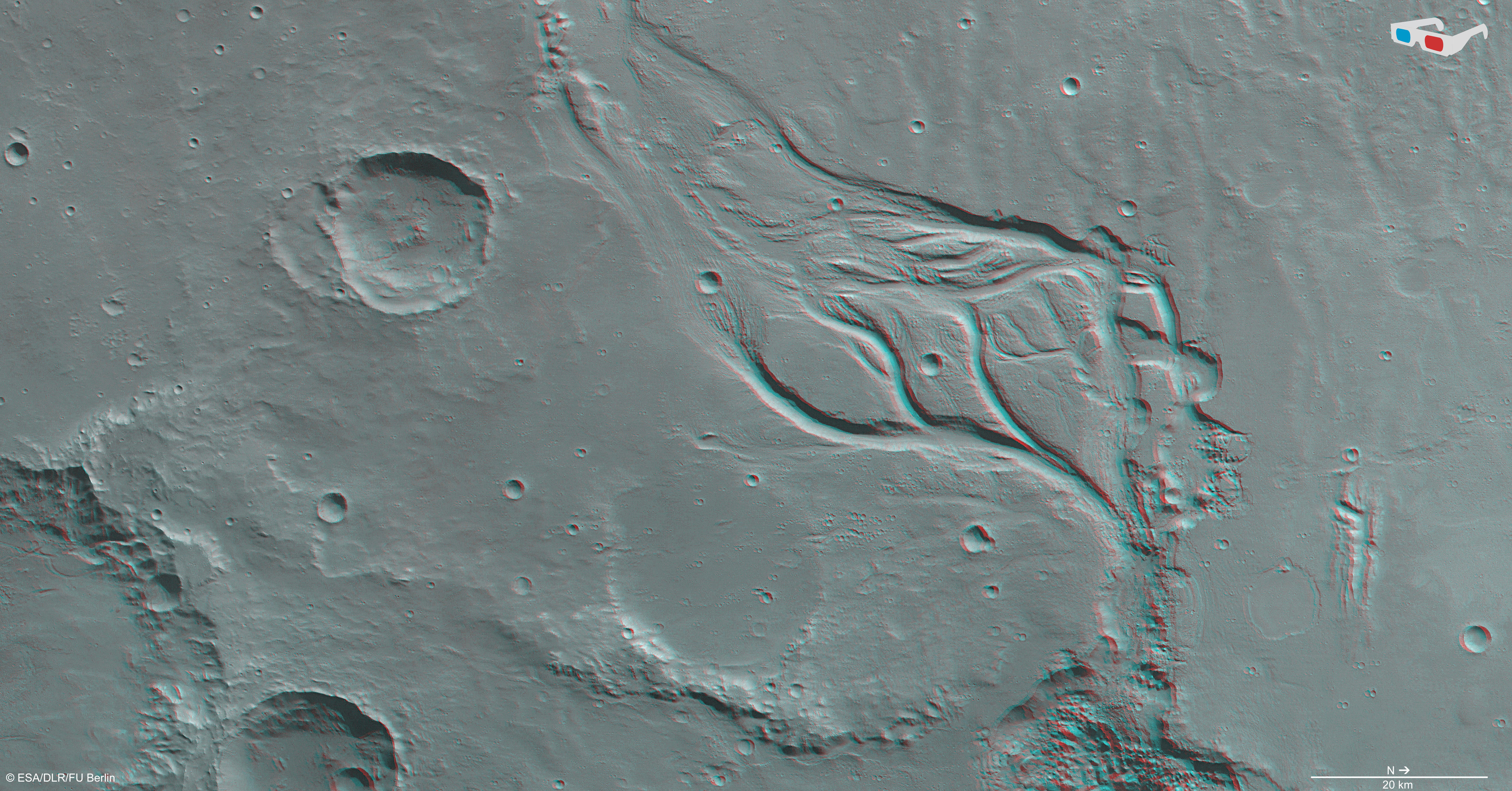 The images were acquired by the High Resolution Stereo Camera (HRSC) on 7 December 2013, during Mars Express Orbit 12,624. The image resolution is about 17 metres per pixel. The images show an area south of Eos Chasma.The color plan view (image 2) was created using data from the nadir channel, the field of view of which is aligned perpendicular to the surface of Mars, and the color channels of the HRSC. The oblique perspective view (image 1) was generated using data from the HRSC stereo channels. The anaglyph (image 4), which provides a three-dimensional view of the landscape when viewed using red-green or red-blue glasses, was derived from data acquired by the nadir channel and one stereo channel. The color-coded topographic view (image 3) is based on a digital terrain model of the region, from which the topography of the landscape can be derived.