Lava at the foot of Mistretta Crater

These images, acquired by the High Resolution Stereo Camera (HRSC), operated by the German Aerospace Center (Deutsches Zentrum für Luft- und Raumfahrt; DLR) on board the European Mars Express spacecraft, show the extent to which volcanism has shaped the surface of Mars. Mistretta Crater and the surrounding highland plateau of Daedalia Planum were flooded by lava flows originating from Arsia Mons – a volcano almost 17.7 kilometres high, 900 kilometres to the northwest. The views shown here were created by the Planetary Sciences and Remote Sensing group at Freie Universität Berlin. The systematic processing of the HRSC image data is carried out at DLR. 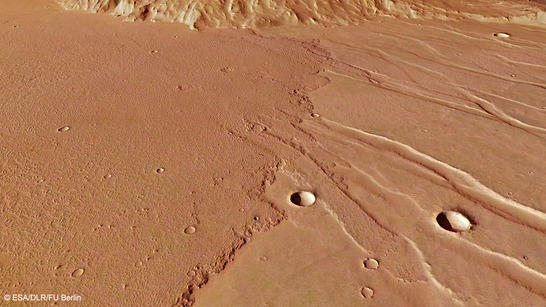 The lava flows that covered the region – flood basalts – are a very low viscosity type of volcanic rock that can spread out over wide areas. The HRSC images show flood basalts that advanced into the region of Mistretta Crater during two different eruption phases. First, they formed a very smooth surface, visible on the left side of images 1, 3 and 4. Erosion and the deposition of sand and dust by the wind have smoothed out most of the irregularities. –Later, tectonic stresses gave rise to numerous grabens.

On the right side of the images, an extensive, younger lava flow can be seen that advanced into the area following the period of tectonic change. The surface of this solidified lava flow has a somewhat flatter structure and is covered by a rough, wrinkled pattern. The flow front of the lava flow is especially striking; it can be seen particularly well in the false colour topographical image map (image 3).

Several wrinkle ridges can be seen running parallel to the edges of the lava flow. Such structures are caused by lava flowing at different speeds – it has cooled more at the edges and so is flowing significantly more slowly there than in the centre of the lava flow. The elevated region surrounding Mistretta Crater also forms a natural obstruction. The lava has flowed around this and, in some places, even ‘surged’ and piled up as a result. This can be seen particularly well in the centre of the images, on the western edge, and in the north of the Mistretta area. 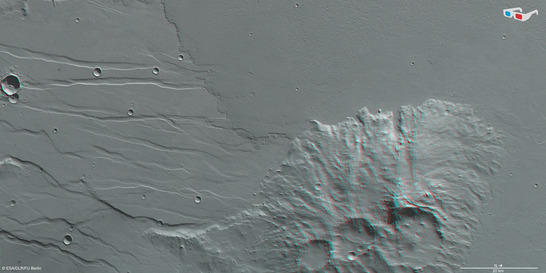 The images were acquired by the High Resolution Stereo Camera (HRSC) on 28 November 2013, during Mars Express Orbit 12,593. The image resolution is about 14 metres per pixel. The images show an area around Mistretta Crater, which is located in the boundary region between Claritas Fossae and Daedalia Planum.The color plan view (image 2) was created using data from the nadir channel, the field of view of which is aligned perpendicular to the surface of Mars, and the color channels of the HRSC. The oblique perspective view (image 1) was generated using data from the HRSC stereo channels. The anaglyph (image 4), which provides a three-dimensional view of the landscape when viewed using red-green or red-blue glasses, was derived from data acquired by the nadir channel and one stereo channel. The color-coded topographic view (image 3) is based on a digital terrain model of the region, from which the topography of the landscape can be derived.