Flight over the canyon-area Hydraotes Chaos

In 2004 the first HRSC image of the Martian surface was released, acquired by the High Resolution Stereo Camera, which was developed and is operated by the German Aerospace Center (Deutsches Zentrum für Luft- und Raumfahrt; DLR) and carried on board ESA’s Mars Express spacecraft. This image (out of orbit 0018) is part of the mosaic shown here. The animations and images cover part of the region Hydraotes Chaos at 323° East und 2° North, and were created by the Planetary Sciences and Remote Sensing group at Freie Universität Berlin. The systematic processing of the HRSC image data is carried out at DLR Institute of Planetary Research Berlin-Adlershof. 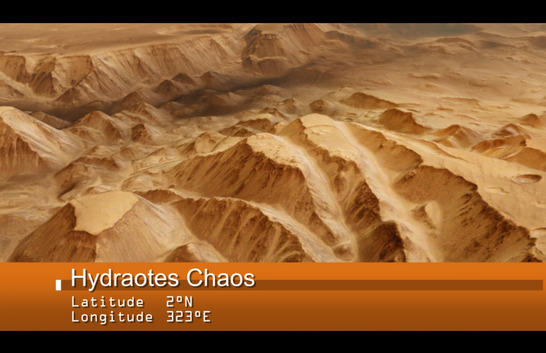 Among the most interesting landforms on Mars are features referred to as 'chaotic terrain'. Dozens or even hundreds of isolated mountains up to 2000 metres high are scattered in these extensive regions. Seen from orbit, they form a bizarre, chaotic pattern. Such terrains are found over a large area to both the west and east of Valles Marineris, the largest canyon in the Solar System. Hydraotes Chaos is a typical example of this type of landscape. This large basin, approximately the size of the German state of Baden-Württemberg, lies in the Martian highlands, near the equator. 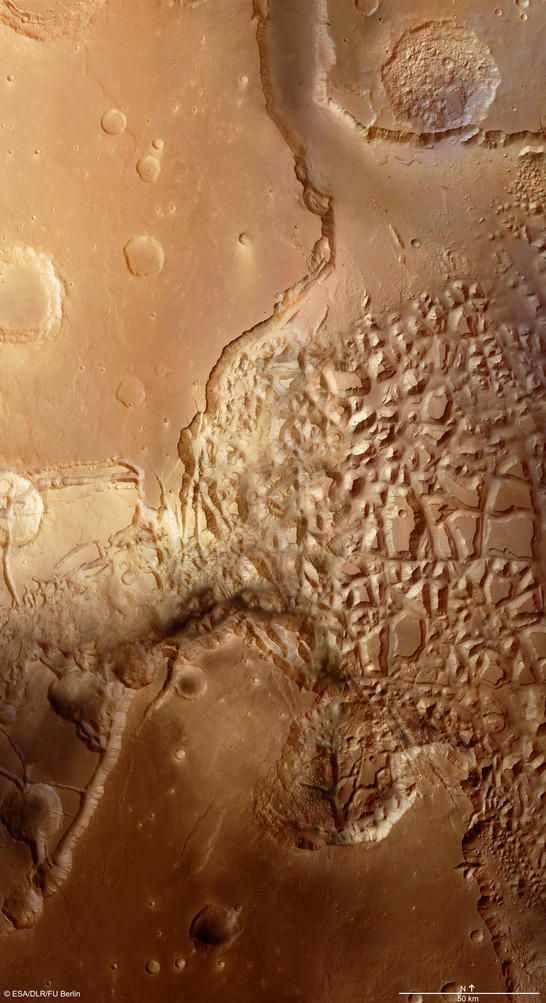 Headwaters of large rivers that flowed from the highlands

No comparable landforms are found on Earth. Scientists believe that water in the form of ice was stored in cavities beneath the surface of the highlands early in the history of Mars; this was then heated and thawed out. It was then placed under so much pressure that it escaped to the surface with great force through fissures and fault zones. As it flowed out, the water eroded the terrain and gradually left behind the striking landscape visible today. Another factor supporting this theory is that many of the chaotic terrains on Mars are located at the head of large outflow channels, through which enormous quantities of water flowed out of the highlands towards the northern lowlands.

The quantities of water that were first stored in Hydraotes Chaos and then flowed northward through Simud Valles must have been enormous. They flowed away from a drainage area about 1500 kilometres in diameter, an area approximately the size of central Europe. The Hydraotes basin is 420 kilometres in diameter. It is thought to have formed a very long time ago – over three and a half billion years – during the Noachian Period on Mars. 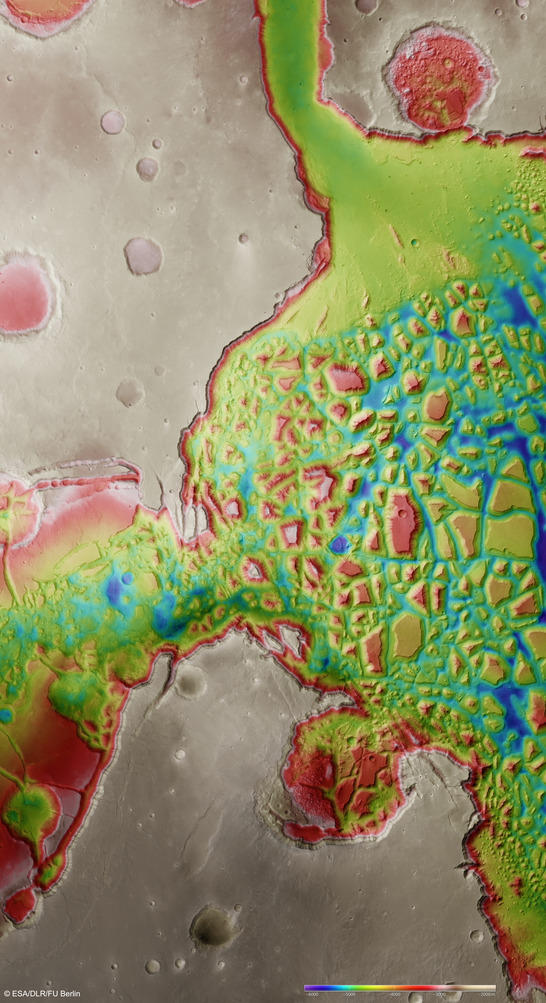 First HRSC image release of the Martian surface 10 years ago

The data used to generate these images and the simulated overflight were acquired with the High Resolution Stereo Camera (HRSC), operated by the German Aerospace Center (Deutsches Zentrum für Luft- und Raumfahrt; DLR) on board ESA's Mars Express spacecraft. Once again, image strips from orbit 18 – symbolically significant for the HRSC scientists – were edited and used for the animations and images shown here. Over 10 years ago, in January 2004, Mars Express flew over Hydraotes Chaos during orbit 18. This was the third time that the HRSC camera had been switched on, and the images in the image strips, which were over 1000 kilometres long, were so spectacular that they were drawn on for publication of the first images from the successful ESA mission. To be able to show the western half of the Hydraotes Chaos basin in a larger regional context, additional HRSC images from subsequent orbits were used for the large image mosaic. The region shown is around 400 by 200 kilometres.

Click on the screenshot below to view the anaglyph-version of the Hydraotes animation. You will need red-blue or red-green glasses to enjoy the 3D effect. 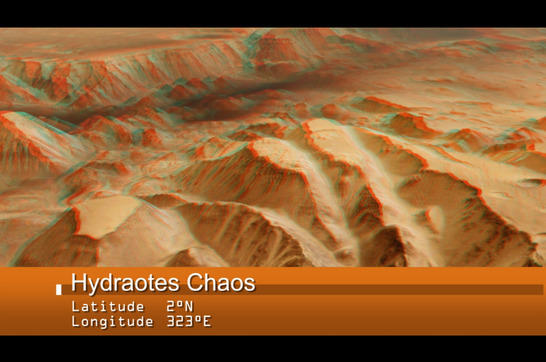 The centre of the images is located at 323 degrees east and 2 degrees north. HRSC images from orbits 0018, 2035, 2057 and 3180 were used for the image mosaic. The colour image (image 2) was acquired using the nadir channel of the HRSC, which is directed vertically down onto the surface of Mars, and the colour channels. The colour-coded plan view (image 3) is based on a digital terrain model, from which the topography of the landscape can be derived.

The High Resolution Stereo Camera was developed at DLR and built in collaboration with partners in industry (EADS Astrium, Lewicki Microelectronic GmbH and Jena-Optronik GmbH). The science team, which is headed by principal investigator (PI) Ralf Jaumann, consists of 52 co-investigators from 34 institutions and eleven countries.