Snow, ice and water shaped the landscape of Hellespontus Montes

These images, acquired by the High Resolution Stereo Camera (HRSC), operated by the German Aerospace Center (Deutsches Zentrum für Luft- und Raumfahrt; DLR) on board the European Mars Express spacecraft, show a whole variety of morphologic features of Hellespontus Montes. On the western edge of the huge Hellas Planitia impact basin, traces can be seen of the icy streams that once flowed here. The views shown here were created by the Planetary Sciences and Remote Sensing group at Freie Universität Berlin. The systematic processing of the HRSC image data is carried out at DLR. 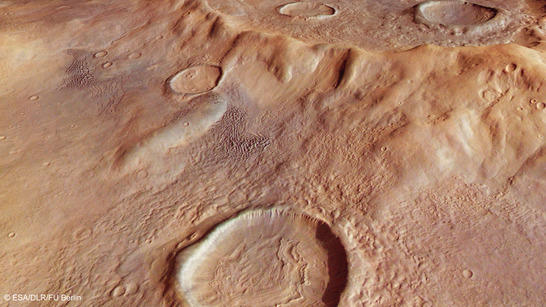 Hellas Planitia is the largest impact crater on Mars – a gigantic, slightly oval depression between eight and nine kilometres deep and up to 2200 kilometres across. The basin was created by the impact of a several-hundred-kilometre asteroid – the repercussions were not merely regional, but affected the entire planet.

The uneven ridge that runs around the rim of the basin – Hellespontus Montes – is the result of the final stages of the formation of the Hellas Planitia impact basin. This rough chain of mountain-like terrain was likely formed when the crater walls, pushed outwards by the tremendous forces following the impact, subsequently collapsed and sank towards the interior, developing the noticeable terraced pattern. Over time, erosion and weathering, as well as various small impacts, altered the terrain on the rim of Hellas Planitia, producing a landscape with an assortment of features. The area shown on the images extends for just under 180 kilometres from north to south by 75 kilometres from east to west, making it roughly the same size as Connecticut.

The images reveal interesting landscape features. Partially eroded sedimentary layers fill the largest impact crater. Portions of these layered rocks were subsequently eroded away – the layers that remained now form numerous flat-topped hills and outliers that were able to better withstand the weathering caused by the Martian wind. Some outliers act as wind breaks, producing smaller crescent dunes arranged like strings of pearls on the lee side (top left in images 2, 3 and 4).

The shape and alignment of these chains of dunes indicate that the wind blew mainly from the east, drifting from the lowland plains of Hellas (below, in the image) to the adjacent highland plains of Mars in the west. More dune fields, some of them substantially larger, are distributed across the image – barchan and crescent dunes, dome dunes and linear dunes that stretch out in long lines.

Also conspicuous are numerous valleys that have been carved into the smooth, slightly undulating surface. Following the slope, they point in the direction of the Hellas basin in the east. Here, the surface consists of deposits, laid down over the existing structures like a blanket. They most likely held large quantities of volatile elements such as water or ice. A few of the more precipitous slopes show traces of less compacted material that has slowly slipped off.

Unusual, convoluted surface structures are visible within some of the smaller craters. Mars geologists speak of 'concentric crater fill' and conclude that, here too, the rock was mixed with ice. These deposits were exposed to substantial pressure – the plasticity of the ice lent the material a certain flowability, allowing it to move downwards towards the crater floor in a manner not dissimilar to glaciers covered by a large quantity of rocky detritus, adapting themselves to the contours of the landscape as they passed.

Studies conducted on rock glaciers here on Earth (the ratio between ice and rock debris is around four to one), together with the known proportionality between the diameter and depth of a crater and the height to which the crater is filled, make it possible to estimate effective ice volumes. It is likely that the ice that flowed in these 'rock glaciers' was several hundred metres thick, and hence comparable with those found on Earth.

It is possible that the remnants of the ice were trapped beneath a surface layer of dust and boulders and measured just a few tens of metres in thickness; indeed, some scientists consider it likely. Regular snowfall in the planet's early days, which accumulated around the peaks of the mountains on the ridge of Hellas basin, could explain the presence of ice in this region of Mars – located far from the South Pole. The atmosphere was probably denser then than it is today, and the humidity may well have been greater. The concentric lines visible in the crater fill are likely to be a consequence of the accumulation of snow and ice over many snowfall and freezing cycles. The rock glaciers located within the crater depressions were protected against sublimation, the process of transition from a solid state to a gaseous phase, for long periods. 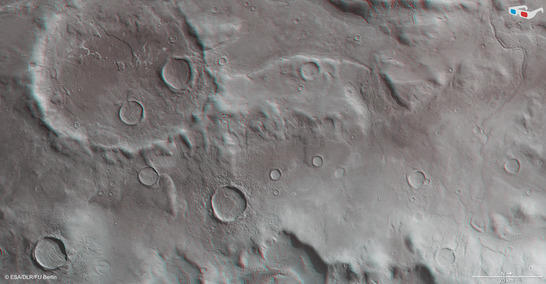 The pictured scene was acquired by the High Resolution Stereo Camera (HRSC) during orbit 12750 on 13.1.2014. The centre of the image is located at approximately 41 degrees south and 45 degrees east. The image resolution is roughly 17 metres per pixel. The color plan view (image 2) was acquired using the nadir channel, which is directed vertically downwards onto the surface of Mars, and the color channels; the oblique perspective view (image 1) was derived from data acquired by the HRSC stereo channels. The anaglyph (image 4), which produces a three-dimensional impression of the landscape when viewed through red-blue or red-green spectacles, was derived from the nadir channel and one stereo channel. The color-coded plan view (image 3) is based on a digital terrain model of the region from which the landscape topography can be derived.

The High Resolution Stereo Camera was developed at the German Aerospace Center (Deutsches Zentrum für Luft- und Raumfahrt; DLR) and built in collaboration with partners in industry (EADS Astrium, Lewicki Microelectronic GmbH and Jena-Optronik GmbH). The science team, which is headed by principal investigator (PI) Ralf Jaumann, consists of 52 co-investigators from 34 institutions and 11 countries. The camera is operated by the DLR Institute of Planetary Research in Berlin-Adlershof.