These images, acquired by the High Resolution Stereo Camera (HRSC) on board ESA's Mars Express spacecraft, show a part of the Hellas Planitia impact basin illuminated in warm bronze and golden hues. The camera is operated by the German Aerospace Center (Deutsches Zentrum für Luft- und Raumfahrt; DLR) and is being used to systematically image the surface of the Red Planet in 3D and in colour for the first time. In orbit around Mars for 10 years, the HRSC has photographed more than 90 percent of the surface. The views shown here were created by the Planetary Sciences and Remote Sensing group at Freie Universität Berlin. The systematic processing of the HRSC image data is carried out at DLR Institute of Planetary Research Berlin-Adlershof. 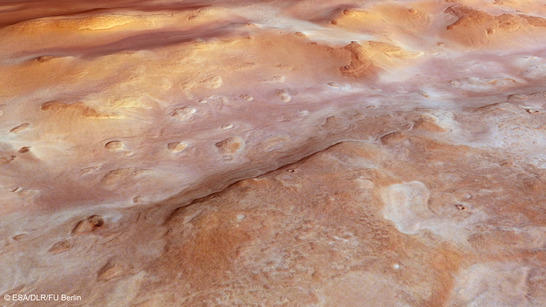 In the Hellas impact basin, the largest crater structure found on Mars, there are a variety of periglacial landforms – areas marked by frost. The impact basin measures 2200 by 1600 kilometres and, in places, has a depth of over eight kilometres. A thin layer of carbon dioxide frost covers the surface in the right-hand section of the images (numbers 2, 3 and 4). Its pattern is multiangular, pockmarked by the seasonal thawing and freezing of water-containing layers found beneath the surface.

The north-facing slopes in the right of the images (numbers 2, 3 and 4) shimmer with a golden hue – probably caused by the low Sun, which at the time the image was acquired was only about 25 degrees above the horizon. The area covered by the images is seemingly divided into two sections, where the left-hand section appears far smoother than that on the right.

Streams of lava and floods of water

The chaotic area of Hellas Chaos is located in the southern part (on the left in images 2, 3 and 4) of this section in the Hellas impact basin. These regions are known as chaotic as they exhibit an extremely rugged surface, shaped by erosion, in which individual table mountains, boulders and hills produce a haphazard structure of chaotically arranged canyon buttes. Hellas Chaos extends for roughly 200 kilometres along a north-south axis and 500 kilometres from east to west. As yet, it is not known precisely how this terrain was formed.

Scientists suspect that a large quantity of sediment was deposited in the Hellas impact basin, parts of which were then eroded by the wind, and also by the water that once flowed down from the northeast, passing through the Dao and Harmakhis valleys and spilling out into the Hellas Planitia. However, a glance at the topographical survey map shows enormous, expansive streams of petrified lava snaking their way around the chaotic region. It is possible they emerged following impact or were produced by an eruption of the Amphitrites Patera volcano situated on the southern border of the Hellas impact basin.

A clear view, at last

Dust in the atmosphere has, on many occasions since the arrival of the Mars Express spacecraft in 2004 and seemingly whenever it crossed the crater, prevented a clear view of the terrain extending across the massive Hellas Planitia impact basin. But the conditions have improved since the start of the year. The mission team has used the consistently good visibility to acquire as many images of this area as possible.

The image was acquired by the HRSC on 23.1.2014 during Mars Express Orbit 12,785  at approximately 46 degrees south and 69 degrees east. The ground resolution is about 18 metres per pixel. The color image (image 2) was created using data from the nadir channel, the field of view of which is aligned perpendicular to the surface of Mars, and the color channels of the HRSC. The oblique perspective view (image 1) was generated using data from the HRSC stereo channels. The anaglyph (image 4), which provides a three-dimensional view of the landscape when viewed using red-green or red-blue glasses, was derived from data acquired by the nadir channel and one stereo channel. The color-coded topographic view (image 3) is based on a digital terrain model of the region, from which the topography of the landscape can be derived.