Deep deep down in the Hellas basin

When looking at Mars through a telescope, once does not usually recognise many landscape features – especially since observations are often affected by dust storms that rage in the Martian atmosphere. The Hellas Planitia impact basin is, however, visible as a large, light, almost circular area in the southern hemisphere. Images of the deepest parts of this impact basin – with unusually great visibility – have now been acquired with the High Resolution Stereo Camera (HRSC). The scenes shown here were created by the Planetary Sciences and Remote Sensing group at Freie Universität Berlin. The systematic processing of the HRSC image data is carried out at DLR Berlin. 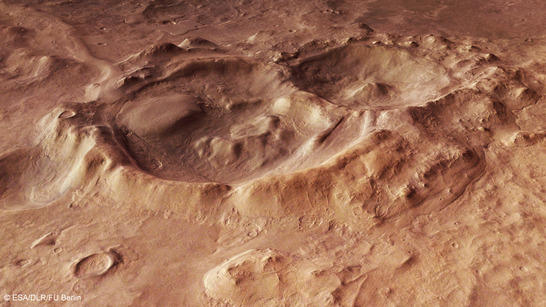 The Hellas basin was formed when a huge asteroid, probably well over 100 kilometres across, impacted the young Martian crust. That happened about 4.1 billion years ago, towards the end of the Noachian period, which lasted until about 3.7 or 3.8 billion years before our time. During this period, the greatest number of asteroid impacts occurred on the Solar System’s inner planets. This is clear from the numerous circular, dark volcanic rock-filled craters on the near side of the Moon. Even Earth was not spared from these heavy cosmic collisions during the ‘Late Heavy Bombardment’. The dynamic nature of Earth’s crust has long erased all traces of these impacts. With a diameter of roughly 2200 kilometres, together with the South Pole-Aitken basin on the far side of the Moon and the Valhalla basin on Jupiter’s moon Callisto, Hellas is one of the largest impact scars in the Solar System. 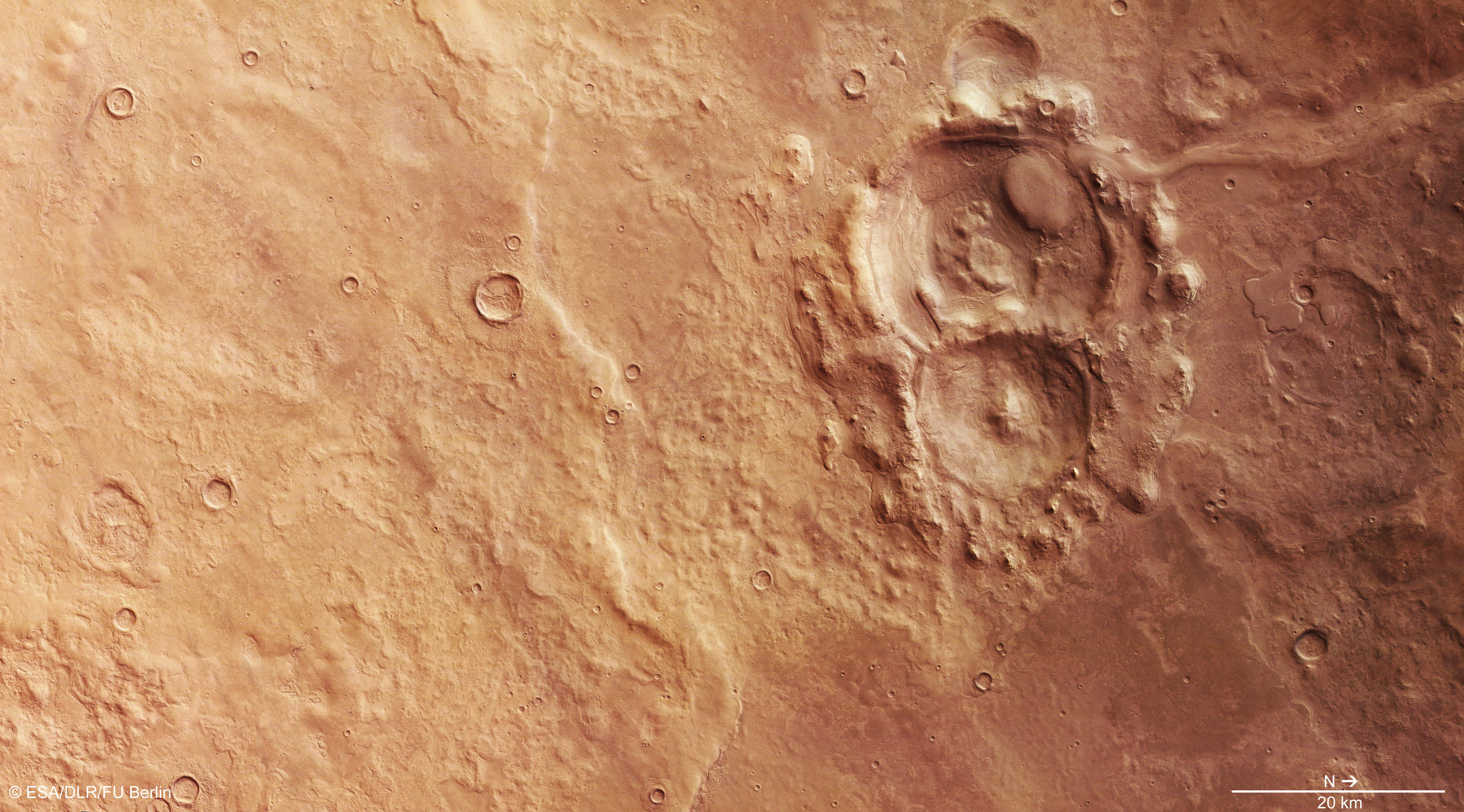 Water could be stable at the bottom of Hellas

Today, Hellas Planitia is the deepest preserved impact basin on Mars. An altitude of more than 4000 metres separates the floor of the basin from the edge of the innermost of several concentric crater-ring mountains. Moreover, the altitude difference reaches an overwhelming 9000 metres to the peaks of the outermost mountain ranges of the crater rings formed by the impact. Over time, the interior of Hellas Planitia has been greatly altered by geological processes. The wind has blown dust into the basin, glaciers and streams have transported and deposited sediment, and volcanoes have built up layers of low-viscosity lava on the floor of Hellas. Despite its exposure to erosion and coverage by deposits for a long period of time, it is the best-preserved large impact basin on Mars.

The deepest points of Hellas are located in the western part, shown here in the HRSC images acquired on 17 December 2013 during Mars Express orbit 12,690. The good visibility conditions from orbit on this day are uncommon because, usually, fierce dust storms that blow from the highlands and the arc of mountains over the plain of Hellas produce a haze of dust and aerosols that partially obscures the surface. At the deepest points of Hellas, the atmospheric pressure is almost twice that at ground level in the adjacent Mars highlands. At times, the pressure and temperature conditions are sometimes above what is known as the ‘triple point’ of water, so that in some places, water on the surface could be stable. At higher elevations on Mars, water rapidly ‘evaporates’ due to the low atmospheric pressure. 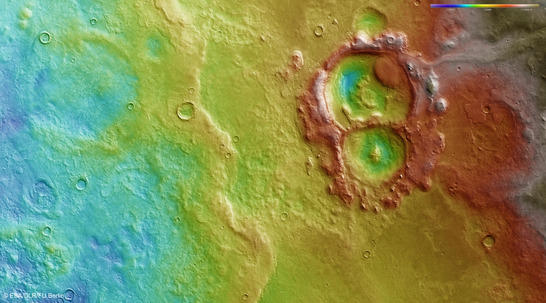 Glaciers with thicknesses of up to 450 meters suspected

The form and shape of many landscape features in Hellas Planitia suggest that ice and glaciers have had an effect on the interior of the basin – and perhaps still exist under the thick dust cover. Radar measurements with the SHARAD instrument on board the NASA Mars Reconnaissance Orbiter (MRO) suggest that under the elongated, sinuous debris and rubble structures, glaciers with a thickness of up to 450 metres are still hidden from the gaze of the camera in several smaller craters in Hellas. Large-scale analysis of the images suggests that a thick layer of dust could be covering the entire area. An old crater, 40 kilometres across, in the southern (left) half of the images can only be recognised from its outlines; it has probably been filled by lava flows, whose flow fronts extend from east to west through the centre of the image

In the images, two other, clearly better preserved, craters are visible; the larger of the two has a diameter of about 25 kilometres. What is striking is the unusual morphology of the craters and their surrounding areas. From the north (top right in images 2, 3 and 4, and top left in image 1) a thick band that looks like a dust covered fire hose extends up to the crater rim. There is a similarly patterned, oval-shaped structure inside the larger crater. At the southern edge of the crater, there is material whose surface shows flow structures. On closer inspection, it indicates the flow direction that ran parallel to the edges of these structures. It is very likely that debris and rubble-covered glacial ice has produced these phenomena. Looking at image 4 with 3D glasses, you can also recognise layers in the crater edges. 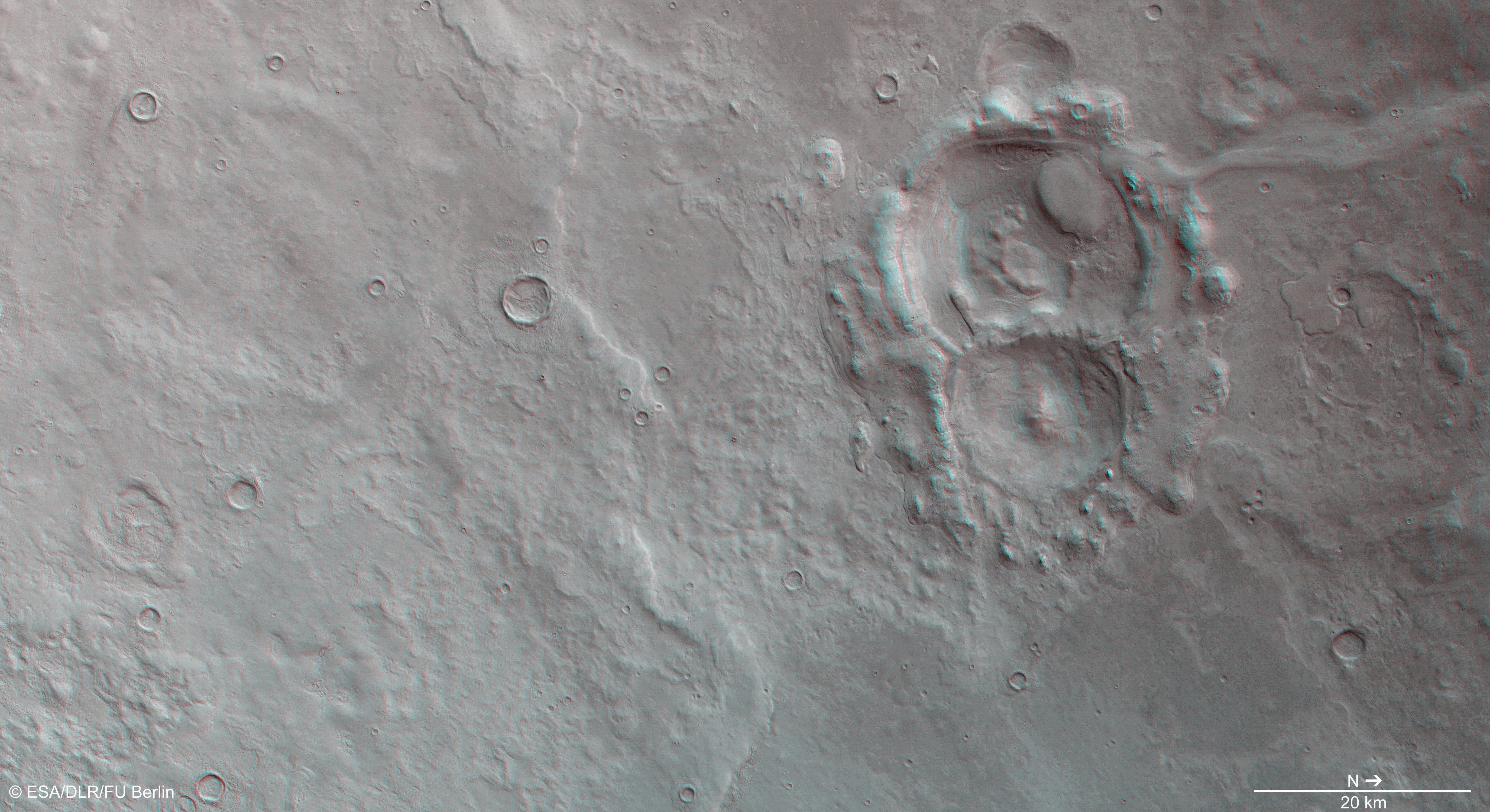 The image was acquired by the HRSC during Mars Express Orbit 12,690  at approximately 33 degrees south and 57 degrees east. The ground resolution is about 15 metres per pixel. The color image (image 2) was created using data from the nadir channel, the field of view of which is aligned perpendicular to the surface of Mars, and the color channels of the HRSC. The oblique perspective view (image 1) was generated using data from the HRSC stereo channels. The anaglyph (image 4), which provides a three-dimensional view of the landscape when viewed using red-green or red-blue glasses, was derived from data acquired by the nadir channel and one stereo channel. The color-coded topographic view (image 3) is based on a digital terrain model of the region, from which the topography of the landscape can be derived.