Exactly 10 years ago, on 1 July 2004, Cassini-Huygens reached Saturn. With a 90-minute burn of the onboard rocket engine, the engineers at the Jet Propulsion Laboratory (JPL) in Pasadena (California) put the six-ton spacecraft into orbit around the ring planet. Not much later, in December 2004, the Huygens probe of the European Space Agency (ESA) has been released for a mission at the giant moon Titan. The Cassini spacecraft itself is orbiting the second largest planet of our solar system on a wide variety of paths ever since, observing the planet, the rings, the moons, and the magnetosphere with numerous cameras, RADAR, radio wave experiments, and fields-and-particles measurement instruments. For already one third of the 29.5 earth-years long "Saturn-year", Cassini now accompanies Saturn in its orbit around the sun. 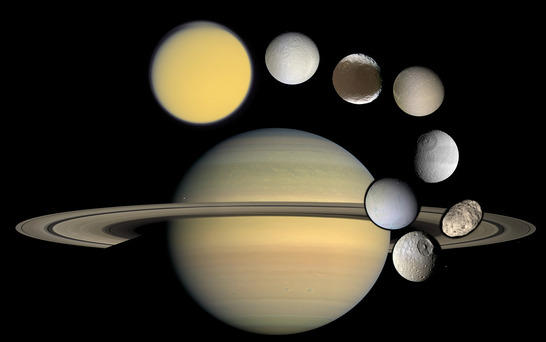 The Freie Universität Berlin is part of the mission since its beginnings through Professor Gerhard Neukum who owns a personal membership in the Cassini Imaging team, and through Professor Ralf Jaumann at the team of the VIMS spectrometer. Since start of this year, Tilmann Denk, staff scientist at the Institute of Geological Sciences, Planetary Sciences and Remote Sensing section, is directly involved as a Cassini Participating Scientist. The tasks of our group include not only the evaluation of the imaging data, but also significant parts of observation design and planning of the moons of Saturn, in particular for Iapetus, Dione, Rhea, and the 38 outer moons of Saturn. Observation planning is a joint effort with the DLR Institute of Planetary Exploration, the Space Science Institute (SSI) in Boulder, CO, and the Jet Propulsion Laboratory (JPL).

10 years in the vicinity of the ringed planet provided plenty of new information about the Saturn system. As expected, many old questions could be solved, while new ones were added. For example, the extreme bright-dark contrast on the surface of large moon Iapetus was known for over 300 years, but the cause of this phenomenon, which is unique in the solar system, remained mysterious. Data from one of the infrared spectrometers plus camera data planned by our group in Berlin eventually provided sufficient information to solve the Iapetus enigma. Furthermore, numerous questions related to geological processes on the surfaces of the moons Dione and Rhea, which had been raised by previous spacecraft missions, were solved. The outer or irregular moons of Saturn are also intensively observed, and for 20 of the 38 known objects, the rotation periods could already be determined by us. At Phoebe, the largest of the outer moons, Cassini successfully performed a targeted flyby while approaching Saturn in 2004. 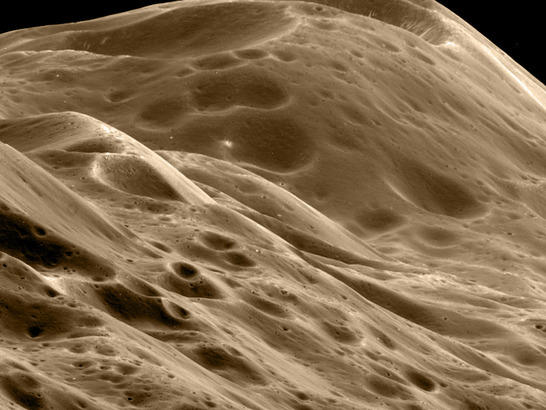 Giant mountains up to 15 km tall were discovered at the equator of the moon Iapetus. The mountain shown here was named Valterne Mons.
Image Credit: FU Berlin 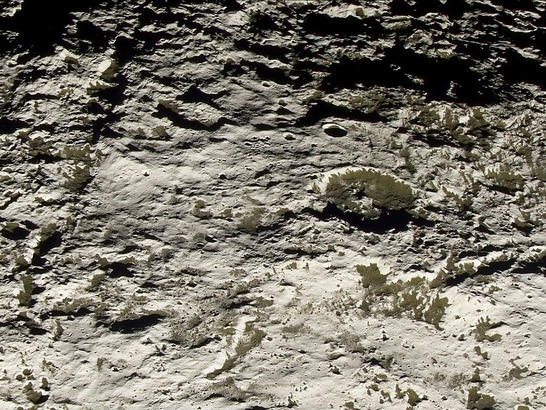 The strong contrast between bright and dark material is also clearly obvious in high-resolution images of Iapetus. The crater Samson (near the center) has a diameter of 33 kilometers.
Image Credit: FU Berlin 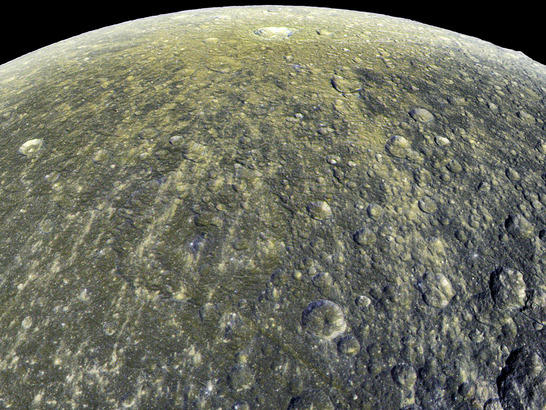 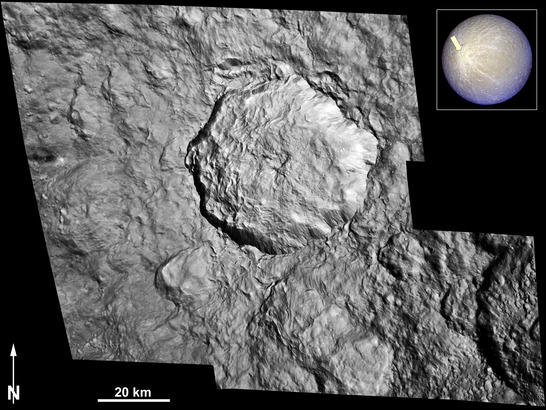 The 47-kilometer-sized ray crater Inktomi is one of the youngest geological structures on the moon Rhea (diameter 1527 km).
Image Credit: FU Berlin/DLR/NASA/JPL/SSI

On the surface of the moon Enceladus, numerous icy plumes (water-ice eruption fountains) were discovered. This phenomenon, very unique in the solar system, is particularly surprising because Enceladus' size is just 500 km. For plume discovery in 2005, almost all scientific instruments of Cassini were involved, another proof that fitting a spacecraft with lots of different scientific sensors is a real benefit for a great mission. Today, it appears certain that a salty water ocean exists beneath the icy crust of Enceladus, which is a potential place for extraterrestrial life forms. In 11 of the 19 targeted Enceladus flybys Cassini performed so far, the spacecraft came closer than 100 km to the surface. 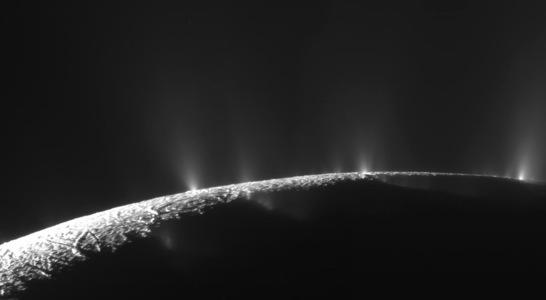 With a diameter of 5150 kilometers, Titan is the largest moon of Saturn and the only moon in the solar system harboring a dense atmosphere, mainly consisting of nitrogen. The visit of the Huygens probe on 14 January 2005 was the first and so far only landing on a body in the outer solar system. Cassini discovered liquids on the surface – unique in the solar system except for the Earth. At a temperature of -180°C, the flowing substrate on Titan is not water, but liquid methane (CH4) and ethane (C2H6). These hydrocarbons accumulate especially in large lakes near the North Pole of Titan. The largest lake was named Kraken Mare, and with an area of approximately 400,000 square kilometers, it is about as big as the Caspian Sea, or 750 times larger than Lake Constance, or in the order of 50,000 times larger than the Müggelsee in Berlin (about 4.3 km x 2.6 km). By the way, a smaller methane lake, located at 84° north latitude and 204° west longitude on Titan, was named Müggel Lacus. With a diameter of approximately 170 kilometers, Müggel Lacus is significantly larger than the original here on Earth. 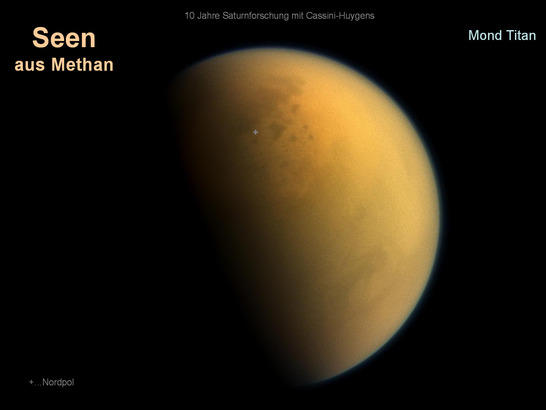 Northern hemisphere of the large moon Titan. The large methane lakes on Titan can be seen through to the atmosphere as dark spots.
Image Credit: NASA/JPL/SSI/FU Berlin (original image here) 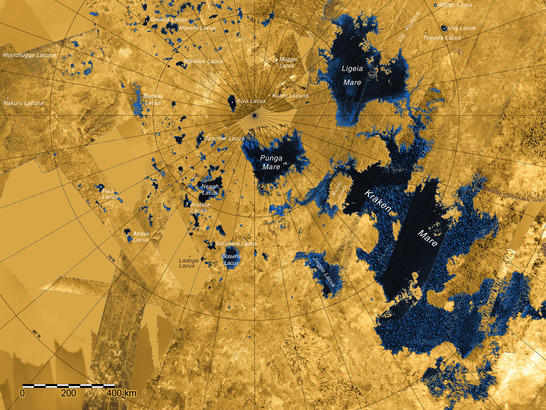 Saturn's rings turned out to be extremely complex structures. Unexpectedly, they are not quite flat, but show significant vertical structures like up to one kilometer high towering ring particles at the inner edge of the so-called Cassini division which separates the A ring from the B ring. In 2009, when the sun was radiating right at the edge of the rings, large shadows showed up in the pictures. 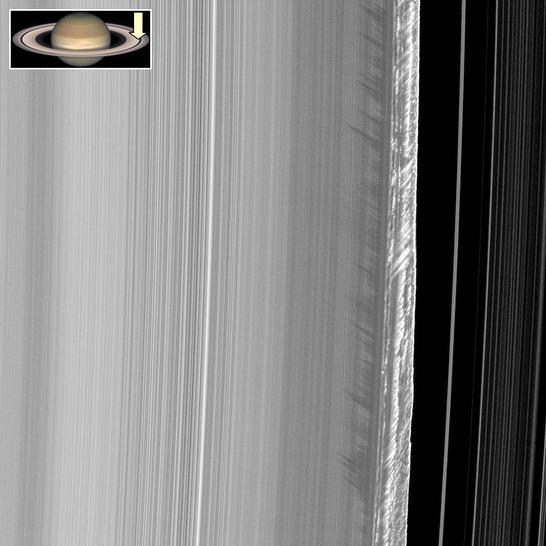 At the transition between the B ring and the Cassini division, the ring particles pile up to one-kilometer high mountains.
Image Credit: NASA/JPL/SSI/FU Berlin (original image here)

Saturn's atmosphere was also intensively explored. At the end of 2010, a giant storm emerged at northern mid-latitudes. It survived for about three quarters of a year and eventually disappeared when the head of the storm reached the tail. Another discovery was the seasonal color change of the atmosphere at high latitudes which appears bluish in the winter and rather sand-colored in summer. The highest-resolved image mosaic of Saturn ever taken dates of October 2004 and was also designed by our group. 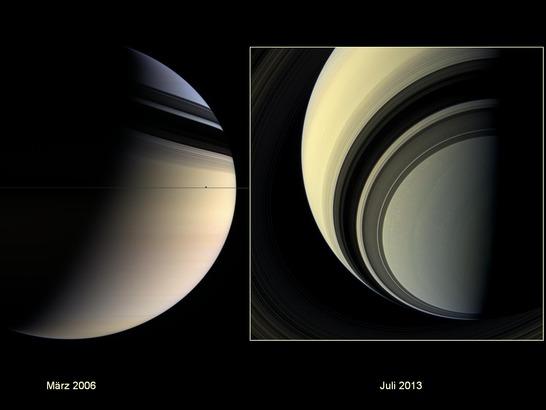 Formation of smog and clearing of the atmosphere results in a seasonal color change in the atmosphere of Saturn.
Image Credit: FU Berlin/NASA/JPL/SSI

During the ten years long mission at Saturn, 2 million commands, 206 Saturn orbits, 132 targeted flybys at Saturn's moons and 291 orbit correction maneuvers were performed by the Cassini spacecraft. Furthermore, about 2 billion miles were travelled, 332,000 images taken, 514 gigabytes of data transferred back to Earth, and 7 small moons discovered. 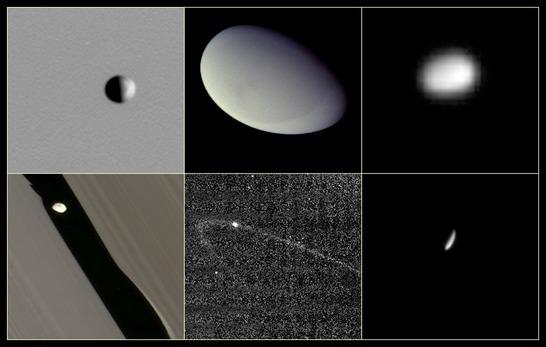 Six of the seven small moons that were discovered by the Cassini spacecraft.
Image Credit: FU Berlin

Despite its advanced age (launched in October 1997), the Cassini spacecraft is in a very good technical condition. In addition to the 10 years of research at Saturn, three more years are expected to follow. In 2015, the large moons will be again a main focus of the monitoring activities. The last two flybys at Titan will take place in November 2016 and April 2017. In this phase of the mission, the "Cassini grand finale", Cassini will again do something completely new. The last Titan flyby will change the trajectory so that the location of the orbit clostest to Saturn (called "periapsis") will no longer lie outside the ring system, but the spacecraft will pass in between the rings and Saturn's atmosphere. Cassini will cross this corridor, which is only a few thousand kilometers wide, 22 times. With the data from this mission phase, additional questions can be solved. These include fundamental quests like for the mass of the rings, the exact composition of Saturn's atmosphere, fine structures in the clouds on Saturn, the (extremely small) deviation of the magnetic field relative to the axis of rotation of the planet, the inner structure of the planet, and its exact rotation period. In addition, RADAR observations of the rings are planned for the first time. The mission finally ends after 294 Saturn revolutions on 15 September 2017 at 12:57 CEST (spacecraft event time) when Cassini will burn up in the atmosphere of Saturn. At this time, the signal propagation delay between Saturn and our Earth is 83.5 minutes. Therefore, the last signal from Cassini will reach Earth on the same day in the early afternoon, around 14:20 CEST, when Saturn is located 30° above the horizon for the DSN (Deep Space Network) station in Canberra, Australia. 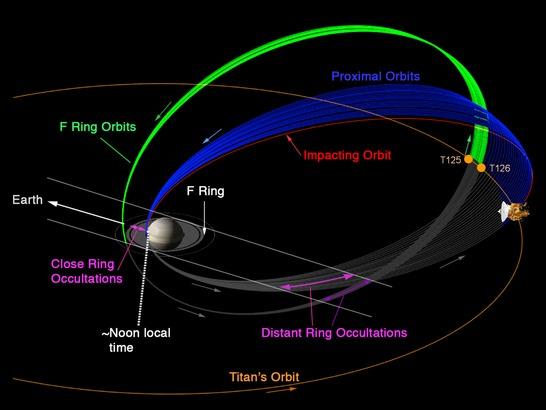 Orbit trajectory of Cassini between November 2016 and September 2017. The mission will end with an impact in Saturn's atmosphere.
Image Credit: NASA/JPL/FU Berlin