These images, acquired by the High Resolution Stereo Camera (HRSC), which is developed and operated by the German Aerospace Center (Deutsches Zentrum für Luft- und Raumfahrt; DLR) and carried on board ESA’s Mars Express spacecraft, shows the Hooke impact crater, located in the Argyre Planitia impact basin in the southern hemisphere of Mars. At that time, it was deep winter in the area, as can easily be seen from the ground frost covering the interior of Hooke Crater and large sections of the landscape in the image. The views shown here were created by the Planetary Sciences and Remote Sensing group at Freie Universität Berlin. The systematic processing of the HRSC image data is carried out at DLR Institute of Planetary Research Berlin-Adlershof. 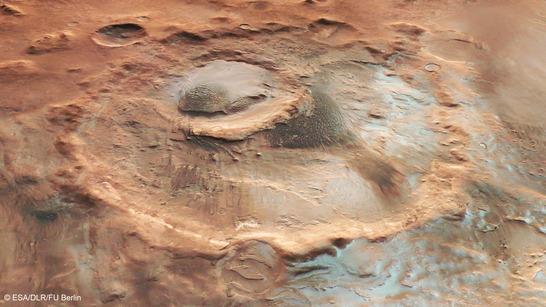 The longest nights are two months past, and the start of spring is still far off here at 45 degrees south. Large sections of the lower-lying regions are covered with a thin layer of frost. This sort of ground frost occurs when ice crystals have precipitated onto the ground from the Martian atmosphere. In higher altitude regions, this no longer occurs, except in a few places lying in shadow, such as on the slopes of the smaller craters. In places that are more exposed to the – albeit still weak – winter sun, the ice has evaporated again. A hill inside Hooke Crater is also covered in the thin ice deposits. 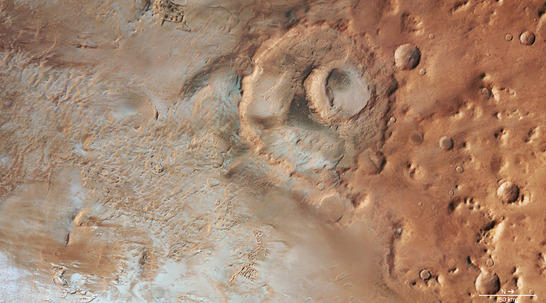 Hooke Crater appears to have been formed by two impacts. The larger crater is almost 140 kilometers in diameter, whereas the smaller one is just 50 kilometers across. Inside the smaller crater is a large hill with a prominent plateau, the western part of which is covered by a dark dune field. Unlike the majority of those on Earth, the dunes on Mars are dark, as they consist of volcanic ash. Rare examples of this on Earth occur on Hawaii, or in New Zealand – places where volcanism is predominant.

On the other side, to the south-east, the ends of several layers on the slope of the hill indicate that the structure appears to be made of different layers of sediment that have been covered with a thick layer of sand and dust or frost. It is possible that the entire hill was formed by the deposition of material transported into the interior of the crater by the wind. 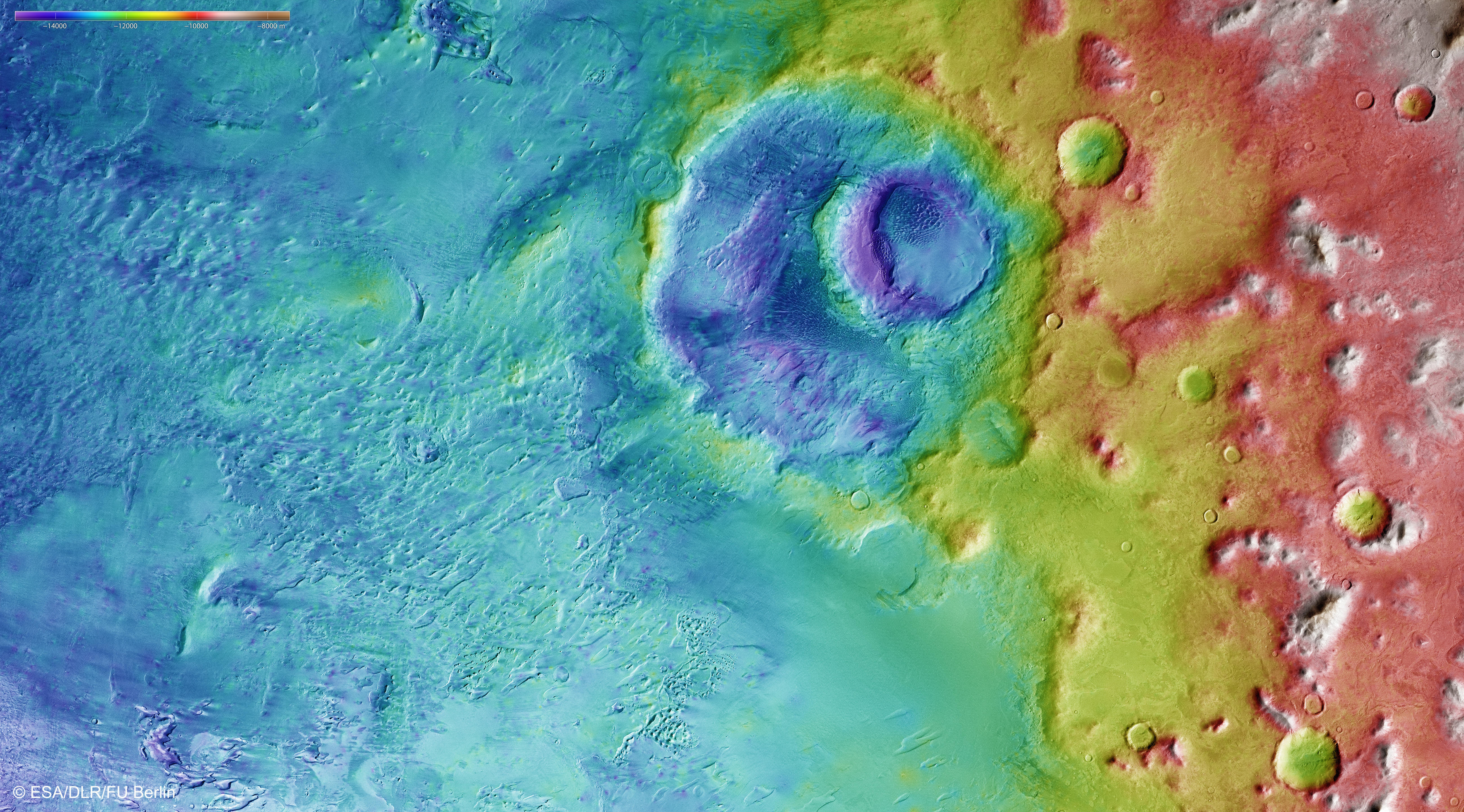 Marked by the wind

Numerous ranges of hills running in parallel can be seen in the left half of the image (images 2, 3 and 4), especially to the southwest of the larger crater. These formations are known as yardangs, and they are caused by wind erosion. When the wind blows grains of sand in the same direction over an extended period of time, the formations are scoured out of the stone as if by a sandblaster. Their orientation also indicates the direction from which the wind has been constantly blowing – here, they run towards Hooke Crater, so from south to north. Clearly, the sand accumulates in this wind trap.

Another interesting detail visible in these HRSC images is the occurrence of several small chaotic areas. One is located in the upper half of the center of the image, and another in the lower part. There are a few mesas and hills in smaller depressions here. Chaotic regions (including the much more striking examples of Iani Chaos, Aureum Chaos or Aram Chaos near the equator of Mars) are extremely fissured surface areas marked by erosion, where individual boulders and hills form a confused structure of chaotically arranged 'witness mountains'. These probably formed when underground ice melted and the cavities that were formed collapsed in on themselves. The surfaces of the two chaotic regions in this image appear to not have completely collapsed yet, so there may still be considerable quantities of water ice under the surface and there could be further collapses later in the course of the geological development. 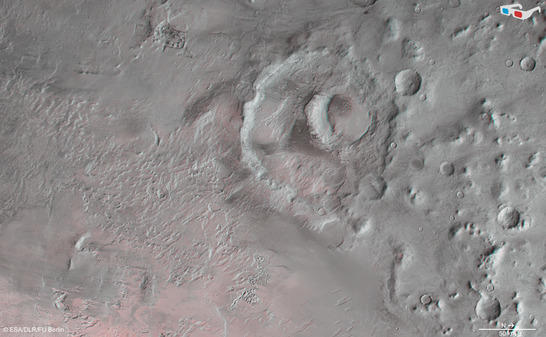 The image was acquired by the HRSC on 20.4.2014 during Mars Express Orbit 13,082  at approximately 46 degrees south and 316 degrees east. The ground resolution is about 15 metres per pixel. The color image (image 2) was created using data from the nadir channel, the field of view of which is aligned perpendicular to the surface of Mars, and the color channels of the HRSC. The oblique perspective view (image 1) was generated using data from the HRSC stereo channels. The anaglyph (image 4), which provides a three-dimensional view of the landscape when viewed using red-green or red-blue glasses, was derived from data acquired by the nadir channel and one stereo channel. The color-coded topographic view (image 3) is based on a digital terrain model of the region, from which the topography of the landscape can be derived.