These images, which were acquired using the High Resolution Stereo Camera (HRSC) operated by the German Aerospace Center (Deutsches Zentrum für Luft- und Raumfahrt; DLR) on board ESA’s Mars Express spacecraft, show a section of the northern part of Hesperia Planum. The region is littered with numerous craters of every size, almost all of which have been heavily eroded over time. This leads to the conclusion that this highland region largely consists of one of the oldest geological formations on the planet. The images shown here were created by the Institute of Geological Sciences at Freie Universität Berlin. 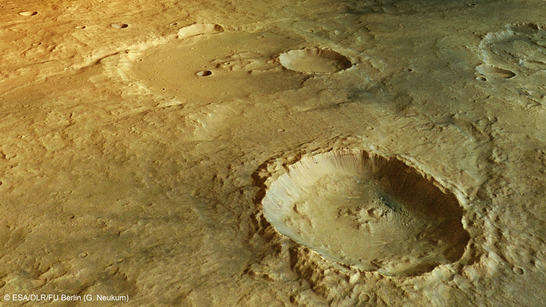 Hesperia Planum is an extensive highland region near the equator on Mars, with a diameter of more than 1500 kilometres. The name Hesperia originates from the term for Occident in antiquity. Because the numerous processes that have occurred in this region and have changed the landscape are typical of the Martian ‘Middle Ages’, this period has been called the Hesperian Epoch, after Hesperia Planum. The Hesperian Epoch, which extends from 3.7 to 3.4 billion years ago, permanently changed the vast areas of the Martian surface. These geological changes are represented to some extent in the images shown here.

To the south of the section of Hesperia Planum shown here, a small dendritic system of valleys called the Tagus Valles reaches its end (see topographic context map). The lower course of the valleys is not that easy to see in the images, as various geological processes have changed the surface and the course of the valleys. In places, meandering valleys can still be recognised in the distinctive, furrowed interior at the bottom (east) and right (north) of the colour-coded topographical map. The Tagus Valles are named after the longest river in the Iberian Peninsula – the Tajo, as it is known in Spain, or the Tejo in Portugal. 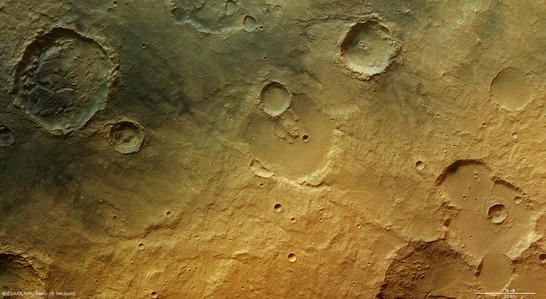 Many craters with a very smooth interior surface are visible in the central and lower part of the color mosaic – to the north and northeast of Tagus Valles. It is possible that these craters were filled with sediments transported and deposited there by water that once flowed through these valleys.

In the lower right quarter of the mosaic, a group of craters can be seen that are all connected with one another and have also been filled. At the centre of these three overlapping craters, a smaller crater is visible, with a diameter of around 6.5 kilometres and a very much more sharply defined rim. This was formed later than the flatter craters and the sediments deposited in them. The crater is surrounded by a prominent ejecta blanket, which is elevated above the plain with a distinctive, rampart-like edge. The shape of the ejecta blanket suggests that, at the time the crater was formed by the impact of a small asteroid, there were wet sediments in the target area. 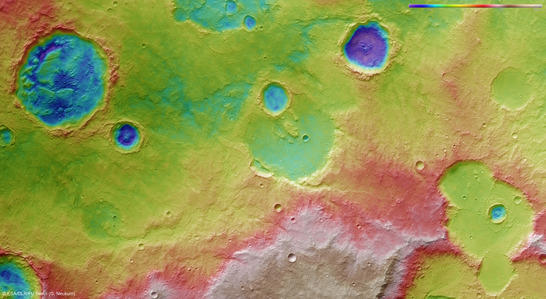 A large number of individual lava flows can be observed on the upper shield and on the scarp. Flows that ended before reaching the scarp did so with rounded tongues, as the lava cooled and crept to a stop. The narrow lava flows clearly show their characteristic morphology, consisting of steep lobate margins, levees and channels. Lava tubes are also present in this scene and form small ridges with partially exposed channel segments. Where lava flows have cascaded down the scarp they have formed broad lava fans, which have been partially buried by the lava flows that formed the flat lava plain at the base of the scarp. From the superposition of the flows, it is clear that the lava plain is younger than the shield-sourced lava flows, but the virtual absence of impact craters on the lava flows indicate that they were formed in the recent history of the volcano.

Further proof of the intermittent presence of water is provided by the dark-coloured crater to the south. The crater is around 34 kilometres in diameter. Numerous large mesas and yardangs (wind alleys) are evident in the interior of the crater; these formed when the crater was previously partially filled with sediment.

The lava plain features wrinkle ridges, a channel system, and individual broad lava flows. The latter are barely visible and do not have well-preserved surface textures. The channel system to the southeast (lower left in the nadir images) was carved by fluids. Material emanating to the east can still be observed. It is likely that lava carved the channels; however, a fluvial origin with transported sediments cannot be ruled out. There are many indications that the crater was inundated several times at different periods in its history. Sediments were deposited in the crater during such events. In order for the unusually chaotic looking landscape in the interior of the crater that we see in the images today to have arisen, some of this sediment must have been eroded away again. One possible explanation for how the sediments inside the crater could have been removed is release processes occurring beneath the surface, which led to the formation of cavities where material collapsed. In the upper right corner of the crater floor, the remains of a narrow valley that once existed there can be seen.

Another interesting feature is the dark-coloured deposits covering part of both the interior and exterior of the crater. The deposits might have been formed from fine volcanic ash deposited over a wide area. Such ash deposits may potentially have originated from the Elysium volcanic province, located to the northeast of the region shown here, or from the adjacent, somewhat smaller volcano Tyrrhenus Mons to the southeast.

The images were acquired by the HRSC on 15 January 2013 during Mars Express Orbit 11,504 at approximately 4 degrees south and 114 degrees east. The ground resolution is about 22 metres per pixel. The colour image was captured using the nadir channel, which is directed vertically down onto the surface of Mars, and the colour channels of the HRSC; the perspective oblique views were computed from data acquired by the HRSC stereo channels. The anaglyph image, which creates a three-dimensional impression of the landscape when viewed with red/blue or red/green glasses, was derived from the nadir channel and one stereo channel. The color-coded terrain model, encoded in rainbow colours, is based on a digital terrain model of the region, from which the topography of the landscape can be derived.