The water that once flowed across Mars in its early days has left many traces. Among these, two terraced mountains located in the Juventae Chasma basin stand out; they appear to be composed of sediment layers. Spacecraft overflights have revealed that these are sulphate deposits containing minerals such as gypsum, alabaster or kieserite, which usually require water to form. One of the many passes of Mars Express, the European Space Agency (ESA) orbiter, was over Juventae Chasma just a few weeks ago. The spacecraft’s High Resolution Stereo Camera (HRSC), operated by the German Aerospace Center (Deutsches Zentrum für Luft- und Raumfahrt; DLR), acquired the images on 4 November 2013. The views shown here were created by the Planetary Sciences and Remote Sensing group at Freie Universität Berlin. The systematic processing of the HRSC image data is carried out at DLR. 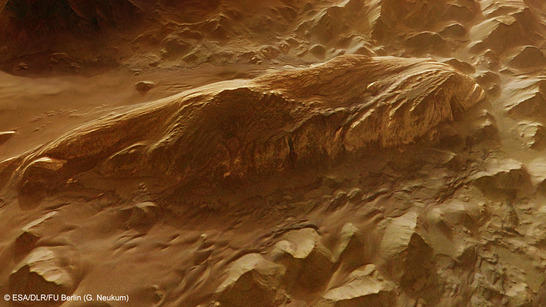 The images have a resolution of approximately 16 metres per pixel, permitting detailed analysis of the structures found in the sulphate mountains. Juventae Chasma lies a few hundred kilometres to the northeast of the central part of Valles Marineris, the vast valley system that cuts up to 11 kilometres deep into the highlands and stretches for almost 4000 kilometres along the Martian equator.

The scale of Juventae Chasma is no less impressive; stretching 150 kilometres from east to west and 250 kilometres from north to south, the structure is approximately as large as the German state of Baden-Württemberg. To the north, Juventae Chasma passes into the Maja Valles, a system of large outflow channels that spreads 1600 kilometres across the highlands before opening into the lowlands of Chryse Planitia. This also is a clear indication that water must have been present here. 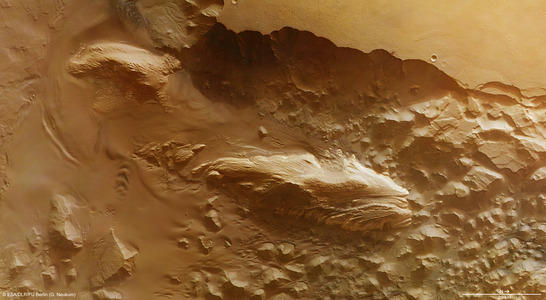 View of an almost 6000-metre-deep basin with gypsum mountains

Like the Grand Canyon in the United States, with its carved paths in the plains of the Colorado plateau, the highlands around Juventae Chasma suddenly plummet into the vast expanse of the deep valley. An astronaut standing on this precipitous ledge would be looking down 5800 metres to the valley floor. Numerous traces of landslides and rock falls can be seen along the flanks. The ground to the south of this depression (to the left in the plan view) reveals a fairly nondescript topography, remaining flat over larger expanses and covered by sandy deposits. In contrast, though, the northern reaches (to the right in the images) are distinctly haphazard, displaying huge massifs formed by landslides that rolled down from the upper edge of the high plateau and are now isolated fragments, exposed to the weather.

The light layers of the two largest, isolated massifs in Juventae Chasma make them easy to spot in the Mars Express images. These two mountains were initially named ‘Mound B’ and ‘Mound C’ by US researchers, where ‘Mound C’ is the larger of the two – although geologists usually use the term ‘mound’ to describe no more than a heap of soil. But Mound C is almost 53 kilometres long, 20 kilometres wide and, at its highest elevation, rises 3300 metres above its surroundings – so its actual dimensions are more equivalent to a mountain chain such as the Zillertal Alps in the Tyrol. The summit ridges of both ‘mounds’ bear clear traces of wind erosion – kilometre upon kilometre of elongated, streamlined ‘yardangs’, produced by the wind blasting sand and dust against the flanks. It would seem, therefore, that the rock is soft and not particularly resistant to erosion. 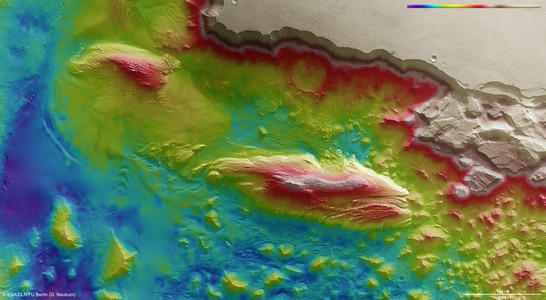 Volcanoes, lakes, river deltas, springs - or did the sulphate "fall from the sky"?

The most striking and geologically interesting feature of Mound B and Mound C is the horizontal stratification arranged like terraces along the mountainsides. The layered sulphate minerals were identified using the OMEGA spectrometer on board Mars Express and also CRISM on NASA’s Mars Reconnaissance Orbiter, which both measure the radiation reflected from the surface in visible and near infrared light. Mineralogists use the term ‘polyhydrated sulphates’, meaning that two or more water molecules are incorporated into the crystalline lattice of these sulphuric acid salts, themselves readily soluble in water. This is also true of gypsum, the best-known calcium sulphate and the mineral of this type most commonly found on Earth.

As yet, there is no clear understanding of the processes that led to the emergence of these sulphate layers on Mars, and hypotheses remain controversial. One theory suggests that the formation of sulphates may have a connection with volcanic eruptions in ice-covered mountains – exposed to the heat released during the eruption, the ice melts, freeing the water to form sulphate minerals. Another idea suggests sedimentation in stagnant water supersaturated with calcium sulphate. Discussions also address the precipitation of sulphates at the end of water courses, in the deltas where the suspended materials carried in the currents form deposits and the dissolved substances form salts as the water evaporates. Another theory suggests that the sulphates formed directly at the sources of the surface water.

Another, somewhat exotic, possibility is that the sulphate layers may, in a sense, have ‘fallen from the sky’. For this to happen, extremely fine granules of dust and ash must have descended from the atmosphere and landed on the surface of Mars, coming into contact with ice. Alternatively, tiny ice crystals may have bonded with dust to form this kind of precipitation. A similar phenomenon is observed on both Martian poles, where layers not unlike those found in Juventae Chasma are deposited as the seasons shift. However, the layered mounds of these sulphate mountains are substantially older than the geologically speaking very young strata found at the North and South Poles, dating back around three billion years. 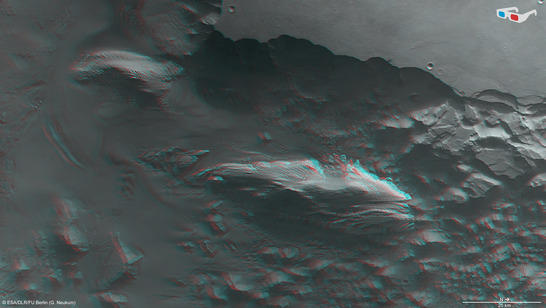 Image processing and the HRSC experiment on Mars Expres

These images were created using data acquired on 4 November 2013 during Mars Express orbit 12,508 using the High Resolution Stereo Camera (HRSC). The image resolution is approximately 16 metres per pixel. The images show a section of the planet located at about four degrees south and 298 degrees east.

The colour plan view (image 2) was created using data from the nadir channel, the field of view of which is aligned perpendicular to the surface of Mars, and the colour channels of the HRSC. The oblique perspective view (image 1) was generated using data from the HRSC stereo channels. The anaglyph (image 4), which provides a three-dimensional view of the landscape when viewed using red-green or red-blue glasses, was derived from data acquired by the nadir channel and one stereo channel. The colour-coded topographic view (image 3) is based on a digital terrain model of the region, from which the topography of the landscape can be derived.