Gentle, rounded landscapes make up the Ismeniae Fossae, and can be seen in these newly released images created using data acquired by the High Resolution Stereo Camera (HRSC) operated by the German Aerospace Center (Deutsches Zentrum für Luft- und Raumfahrt; DLR) on board ESA’s Mars Express spacecraft. Most craters and slopes are completely covered by a layer of fine-grained material that was probably transported there by the wind. The images shown here were created by the Planetary Sciences and Remote Sensing group at Freie Universität Berlin. The systematic processing of the HRSC image data is carried out at DLR. 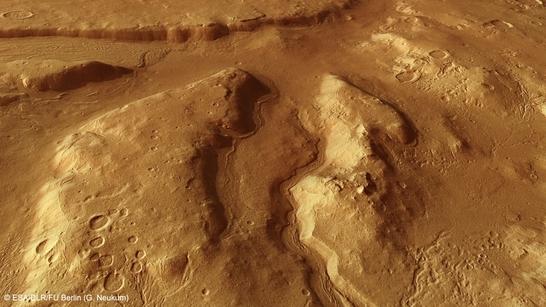 Ismeniae Fossae is located on the border of the southern highlands, stretching out to the adjacent plains of the northern lowlands. The landscape in this region is characterised by rather angular, rugged mountains and deep valleys. The transition from highlands to lowlands occurs along a narrow zone in which erosion has created a striking landscape through the action of rivers, wind, ice and groundwater. This topographic dichotomy between the northern lowlands and the older, heavily cratered southern highlands is one of the most striking features of our neighbouring planet.

The surface of Mars in the southern area of images 2, 3 and 4 exhibits remarkably little in the way of topographical profile. The edges of the terrain are smoothed and rounded as a result of erosion and the deposition of a layer of sand and dust. An old, approximately 20-kilometre-wide impact crater, which is cut in two by a valley-shaped depression, is barely visible as an outline.

Most of the Ismeniae Fossae region can be seen in the topographic context map (see downloads). A trench-like valley stands out in the south, which ends in several branches, or fossae to the northeast at the 130-kilometre-wide Moreux Crater. The name Ismeniae is derived from the Ismenus River in ancient Boeotia, an area of land northwest of Athens. The western edge of Moreux Crater (named after the French astronomer Louis-Théophile Moreux, 1867-1954) can be seen in the lower right of images 2, 3 and 4. The landscape image in the overview map reveals that Ismeniae Fossae could consist entirely of the eroded remnants of a filled impact basin up to 470 kilometres in diameter.

The shape and texture of the exposed residue within this basin, and also the wide valley cutting through the area, resembles a geological landscape type on Mars referred to as ‘chaotic terrain’. Such areas (including, for example, Iani Chaos, Aureum Chaos or Aram Chaos) are extremely rugged; across their erosion-marked surfaces, individual boulders and hills form a jumbled structure of outliers (German: Zeugenberge) in a chaotic arrangement. This geological feature was probably formed when subterranean ice melted and the resulting caverns collapsed.

Starting from this chaotic area, a long, narrow depression follows a crescent shape into the region, which can be seen in the upper part of image 2. This depression can reach up to two kilometres in depth in some places. Its flanks are soft and its boundaries undulating. Its surface is engraved with a pattern of grooves, and streaked structures running parallel to the slopes that surround the valley can be seen.

Such a pattern can be found in many similar valleys with a rectangular profile. Geologists refer to them as ‘lineated valley fill'. The surface texture suggests that ice was once present, possibly in the form of a rock glacier. These are streams of ice, covered by broken ice and rubble, which have slowly flowed down a valley. Numerous narrow, branched valleys west of Moreux Crater suggest that water once flowed on the Martian surface.

Other unusual features of this landscape area are the groups of round or elliptical, sometimes interconnected depressions on the plateau, which can be seen on the left of images 2, 3 and 4. These are either an aggregation of secondary craters – the result of strikes by ejecta from a large impact in the vicinity – or sinks and pits that arose after ice sublimated at or just below the surface.

The images were created using data acquired by HRSC on 16 June 2013 during Mars Express orbit 11,709. The image resolution is about 20 metres per pixel. The images show a section at about 40 degrees north and 42 degrees east.

The colour plan view (image 2) was created using data from the nadir channel, the field of view of which is aligned perpendicular to the surface of Mars, and the colour channels of the HRSC. The oblique perspective view (image 1) was generated using data from the HRSC stereo channels. The anaglyph (image 4), which provides a three-dimensional view of the landscape when viewed using red-green or red-blue glasses, was derived from data acquired by the nadir channel and one stereo channel. The colour-coded topographic view (image 3) is based on a digital terrain model of the region, from which the topography of the landscape can be derived.