Dynamics of Pro- and Retro-wedges

While it is consensus that the Western and Central Alps overly a south-east dipping slab or European lithosphere, the mantle structure beneath the Eastern Alps is controversial. There, the traditional notion of south-directed European subduction has been called into question by global P-wave tomographic images indicating a subvertical to N- to NE-dipping slab anomaly. We follow the idea of Mark Naylor and Hugh D. Sinclair who created a numerical model predicting the growth of a doubly-vergent orogen. As the name implies, this model subdivides an orogen into two pieces: A pro-side and a retro-side. The pro-side is located on top of the underthrust lithosphere, which in our case is the European slab, while the retro-side sits above the overthrust lithosphere and is represented by the Adriatic slab.

According to their model, both sides show a very different evolution through time: the pro-side is rapidly moving, while the retro-side is stagnating most of the time. The evolution of the adjacent foreland basins is also closely tied to the advancing orogen and their sedimentological patterns contain information on how the Alps developed from late Oligocene to today. Since the processes mentioned above are directly related to slab geometry, they are key to understand deep seated plate processes.

In order to give new insights to this enigmatic site, we will reconstruct the late Oligocene to Recent deformation history of the northern and southern Alpine deformation front, which represent the pro-deformation and retro-deformation front respectively. We also will investigate the adjacent peripheral foreland basins: The North Alpine Foreland Basin, (NAFB) and the Veneto Basin to study their evolution through time and analyze their subsurface structures and sedimentary successions. Furthermore, we will perform a high-resolution subsidence analysis of both Foreland Basins and allocate the paleo – drainage divide. 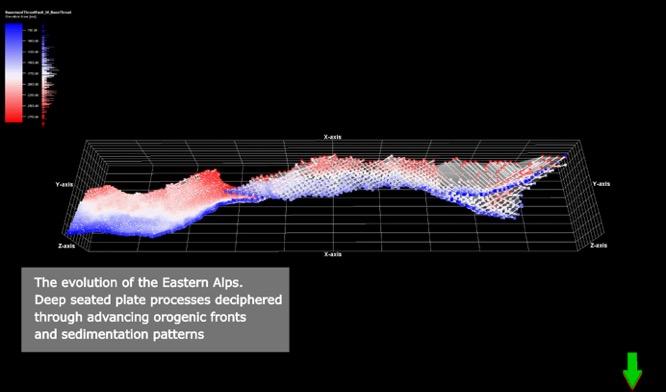