C. Strategies for collaborating / networking across disciplines and locations

Table 1shows the work program divided into four activity fields geared to address the interdisciplinary research themes in section 5.2.1. These activities range from equipment deployment, data acquisition and processing, to analysis of structural, metamorphic and denudation patterns at the surface, and numerical modeling of geophysical and geological information. As the geophysical data from the backbone network and the swaths becomes available, their meaning for mountain-building processes and seismic hazard assessment will only be clear if placed in a robust geological framework that can be extended back in time. These activities must be coordinated to ensure that the geophysical images from the AlpArray experiment are interpreted consistently with geological information from the surface. The activities overlap in time during the 1st phase (2017-2020) of 4D-MB and some must be intensified during the 2nd phase (2020-2023).

Deployment of land-based (UNBRA/DSEBRA) and sea-floor (LOBSTER) seismometers contributing to the backbone array. The 68 mobile land stations provided by German universities (UNIBRA) will already be in place by late Autumn of 2015 and deliver data to EIDA nodes at GFZ-Potsdam, BGR-Hannover and LMU- Munich by January of 2016. The DSEBRA stations will be deployed in Autumn of 2017, replacing UNIBRA and taking over an additional 32 sites of AlpArray partners. DSEBRA will run simultaneously with the swaths to provide essential coverage of their surroundings (Appendix V). Data transmission to the EIDA nodes will continue smoothly. Data from the seafloor stations can only be retrieved after instrument recovery (~12 months after deployment). German ship time for deployment has been granted for Autumn of 2016 (Appendix VI). Hence, offshore data will be sent to EIDA by Autumn of 2017. Ship time for offshore deployment of broad-band OBS stations will be shared by Germany and France (LOBSTER; French cruises for deployment and maintenance after 6 months). IPGP (Paris) will commit its 9 OBS stations to AlpArray. To achieve a station spacing of < 60 km in the Ligurian Sea, LOBSTER will deploy 24 OBS from the DEPAS pool, bringing the OBS total to 33. Instrument costs for the IPGP and DEPAS pools will be shared by France and Germany, the latter through the funding package requested for 4D-MB (section 9, Appendix VII). This shoreline-crossing approach will provide seamless subsurface images (Kopp et al. 2011).

Deployment of mobile broad-band seismometers in densified networks along swaths C and D: The moving array of swath C will comprise a network of 7 x 9 stations spaced some 12 km apart and covering an area of 100 x 70 km. Swath D will consist of a network of 6 x 26 similarly spaced stations over an area of 300 x 60 km deployed for two years. Deployment and operational costs for the swaths are part of the funding package in section 9 (Appendix VII).

Real-time models of the orogen-wide distribution of seismic properties (velocities, attenuation and anisotropy) as well as seamless images of the LAB, the Moho and intracrustal detachment and melt horizons beneath the Alps and its forelands, especially near purported slab tears and switches in subduction polarity (Theme 1). Seismic data from swath D will be combined with results from the EASI swath (Fig. 4a) to provide unprecedented ~10 km resolution of lithospheric structures at the transition of the Central and Eastern Alps. The 3D models will be obtained from the inversion of travel times, amplitudes and full waveforms of teleseismic and local phases, 3D inversions of scattered and converted waves, together with high-resolution ambient noise and surface wave studies. The seismological images will be integrated with results from gravity studies to constrain the subsurface geometry of crustal-scale faults from the surface down, and with results of the MT studies pending a successful feasibility study.

Seismic anisotropy of the crust and mantle, and its origins (Theme 3): Seismic and laboratory investigations of seismic anisotropy will allow us to resolve how deformation is partitioned between the orogenic crust, the slabs and the surrounding mantle. When combined with geodynamic numerical modeling, this will give clues about the rheology of the mantle, especially at major mechanical and compositional interfaces (Moho, LAB). Seismic techniques applied to AlpArray data to constrain the 3D geometry of asthenospheric flow will include body- and surface-wave analysis, shear-wave splitting, polarization analyses, and the azimuthal dependence of receiver functions.

Thermo-mechanical models of the crust and mantle in the Alpine orogen and its forelands will be developed to understand the effects of slab configuration, slab breakoff and rheology on mantle flow patterns and crustal stresses as well as on vertical and horizontal surface motion patterns (Themes 2, 4). In addition, new geodynamic inverse modeling approaches will be developed which combine various geophysical datasets (seismicity, gravity, GPS velocity and possibly MT) with geodynamic models in order to constrain the rheology of the present-day Alpine lithosphere (Theme 3).

Activity field 3: Geological studies of the kinematics, conditions and timing of orogenic processes

Structural and thermo-chronological analyses of active and potentially active faults, particularly near swaths C and D (Fig. 4b): Targetable fault systems include thrusts (e.g., Sava-Fella system, star 1) and strike- and oblique-slip faults (e.g., the SEMP fault, star 2) that potentially show different degrees of coupling with the orogenic crust and mantle (Themes 1, 2, 3). Along swath C, comparing long-term “geologically” derived slip rates with short-term geodetically derived slip rates on active faults (star 1) will allow us to pinpoint locked faults and fault segments that have stored stress and are therefore likely to generate destructive earthquakes. Local seismicity datasets from the swaths will improve constraints on the geometry of active faults at depth. Synthesizing this data will help improve seismic hazard maps in the area (Theme 4).

Structural and geochronological investigations of fossil faults, including their geometry and microstructure, will yield insight into the rheology of strain localization, as well as constrain the duration of deformation (e.g., the Periadriatic Fault, Fig. 4b). This is essential for improving kinematic reconstructions of the Alps and yielding estimates of deformation rates (Theme 4).

Integrated petrophysical and thermo-chronological studies on HP and UHP metamorphic assemblages will enable the reconstruction of rock trajectories during subduction and exhumation as a guide to ongoing processes in subduction channels along the tops of slabs imaged by AlpArray (Theme 3). Petrophysical measurements will be conducted on exhumed rocks from former subduction zones to test for processes that contribute to seismic anisotropy of the crust. The Alps have a rich inventory of locations to study subduction and exhumation processes (e.g., stars 3 and 4 in Fig. 4b, Eclogite Zone and Glockner nappe in the Tauern Window, Dora Maira and Monviso areas in the Western Alps).

Measurement of denudation and uplift and their rates on different scales: Tracking erosion from individual seismic events paired with meteorological observations will yield insight into the efficiency of mass transfer from source areas to piedmont settings (Theme 2). Seismicity in the Alps will be compared with erosional estimates derived from hydrometric gauging as compiled by national agencies in the Alps. The long-term effects of slab breakoff at the surface (Themes 1 and 2) will be tested by measuring topographic metrics and rock-uplift and erosion rates in areas directly overlying the purported slab gaps and breaks (respectively, stars 5 and 6 in Fig. 4b) and comparing them with background rates (e.g., Norton et al. 2011). Uplift rates and time-integrated erosion rates will be obtained, respectively, from river loads, cosmogenic nuclides and thermo-chronology (Hovius & von Blanckenburg 2007).

Develop new lithospheric model of the Eastern Alps using a combination of new data from swath D and the EASI swath, reprocessed active-seismic data from the TRANSALP experiment (TRANSALP Working Group, 2006) and recent structural data at the surface (Schmid et al. 2013, Scharf et al. 2013). Reprocessing existing seismological data with new methods developed since the late 1990s will provide low-cost information that is a requisite for clarifying the subduction polarity and complex structure at the interface between Alpine orogenic crust and the Adriatic indenter. New structural geological data will be projected onto the TRANSALP section to obtain an integrated geological-geophysical section through the narrowest part of the Alps at 11°E, where shortening and orogenic indentation are greatest and where subduction polarity appears to switch (Theme 1).

Compile a kinematic age map of the entire Alps, including its foreland basins and parts of adjacent orogens (Apennines, Carpathians, Dinarides). The new map will complement existing geological maps of the Alps (Schmid et al. 2004, 2008, Bousquet et al. 2012b) which, however, do yet not contain any information on the kinematics or age of the main structures (e.g., large faults, slabs) that have accommodated Adria-Europe convergence since the onset of collision (Theme 4). This map will be published by the end of the 1st phase and will form the basis for paleotectonic maps of the Alpine collisional zone during the 2nd phase (below).

Derive 3D models of the current Alpine mountain belt consistent with all available geological and geophysical observations. This will include integrating terrestrial and satellite gravity data with the new seismological observations. To this end, we will create a unified gravity database for the Alps using terrestrial and GOCE satellite data and compile homogeneous motion datasets for velocities from the available GPS networks (GAIN, EUREF, FreDNet, section VII) to constrain surface motion (Theme 4). By combining models of seismic velocity with phase petrology, velocities can be converted to density, enabling us to test the sensitivity of the gravity field to different structural models of the orogenic root and slab geometry (Theme 1). Lithospheric stress fields will be estimated by combining this new 3D data with dynamic models.

Construct 4D thermo-mechanical models of Alpine mountain-building, beginning with the present configuration of tectonic plates in the Alpine-Mediterranean domain and reaching back to the onset of Tethyan rifting in Early Mesozoic time, possibly even to Late Paleozoic time when post-Variscan tectonics and magmatism cast the structural template on which the Alps were built. Parameterized 2D studies will be aimed at producing robust 4D forward models of Alpine-like mountain belts at 1-2 km of resolution and a million-year time scale. Thermo-mechanically consistent models for the Alpine evolution will be tested against available field and seismic data (Themes 1, 2, 3, 4). 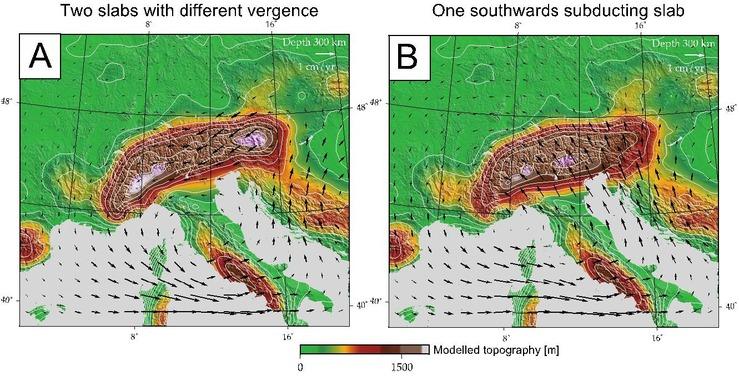 Figure 5: Trial synthetic 4D numerical models for the Alpine region showing modelled topography (colored) and asthenospheric flow (arrows) for the present day at 300 km depth. The models differ only in assumed slab geometry (not shown): (a) Two-slab model with southward subduction in Western and Central Alps, and northward subduction in Eastern Alps; (b) Single-slab model with southward subduction beneath entire Alps. Note contrasting asthenospheric flow patterns and model topographies in the Alps due to differences in slab geometry. The flow patterns and slab geometries will be much better constrained with high-resolution data from the AlpArray experiment. Depth slices can be generated back in time by using numerical models like this to combine AlpArray data with kinematic, thermo-chronological, denudational and uplift data from surface studies, Images courtesy of Boris Kaus, a co-initiator of this proposal.

The following activities represent a logical continuation of the 1st phase, but with more emphasis on synthesizing geological and geophysical data to extend our understanding of Alpine mountain building back in time. The activities are sketched very generally and will obviously be specified during the final months of the 1st project phase.

Fine-tuning 3D geophysical models of Alpine substructure: The models from the 1st phase will be refined in the light of emerging methods and the full AlpArray data set. The focus can then be directed to inversions of the full data set including OBS and swath data, and integrating results from different groups to generate a 3D structural model of the present-day Alpine orogen. This is a necessary step for 4D-modeling.

Tectonic, petrological, and thermo-chronological investigations of Alpine structure: Structures mapped and analyzed during the 1st stage will be pursued across and along strike as necessary in order to determine the kinematics and age of deep structural images projected to the surface. This will involve inversion of thermo- chronological data to constrain the age and rates of deformation. 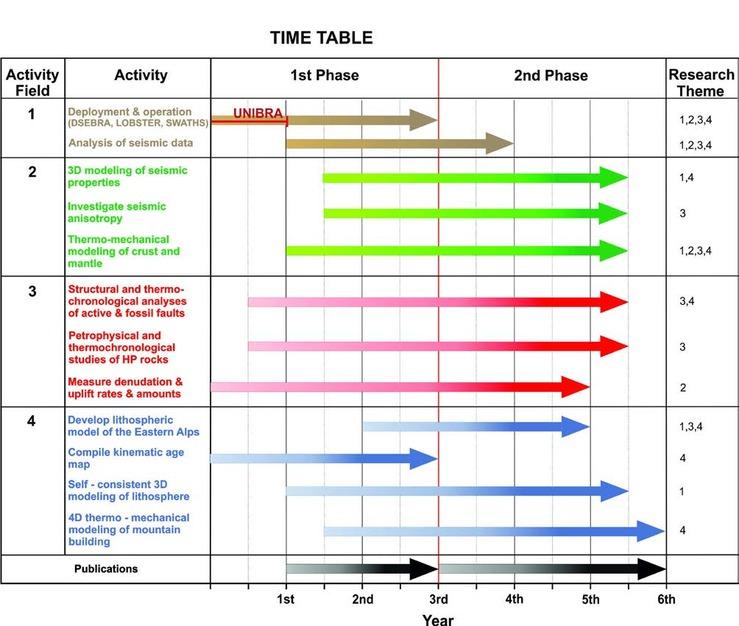