1. The climate diagram of Namibia’s capital Windhoek is shown below. The target is to develop a rooftop harvesting plan for a village in this area.

There are three suitable houses with a rooftop area of 80 m² each. The runoff coefficient of the roof material is 0.95. Every house will get its own cistern for collecting water.

a) Calculate the annual amount of rainwater which can be collected by installing these measures!

b) Calculate the required volume of each cistern with an additional volume of 25%!

c)  According to the World Health Organization (WHO), between 50 and 100 litres of water per person per day are needed to ensure that most basic needs are met and few health concerns arise. There are 40 community members living in the village. If everybody needs 75 l/d, for how many days the cisterns can provide a sufficient amount of water if the collected water is used only for human purposes?

d) If the harvested water is used for crop production, which irrigation system would you prefer due to the natural conditions and why would you choose that?

e) Vegetables require 120 days to grow and 5 l/d/m² of water (including water loss of approximately 40 l/m² due to evapotranspiration). The amount of rainfall is 150 mm/m² during this period. Is it possible to irrigate a field of 180 m² by using the whole amount of harvested water for irrigation?

2. Name at least three benefits and disadvantages of floodwater harvesting!

3. What water harvesting technology is shown below and what are the benefits of this method? 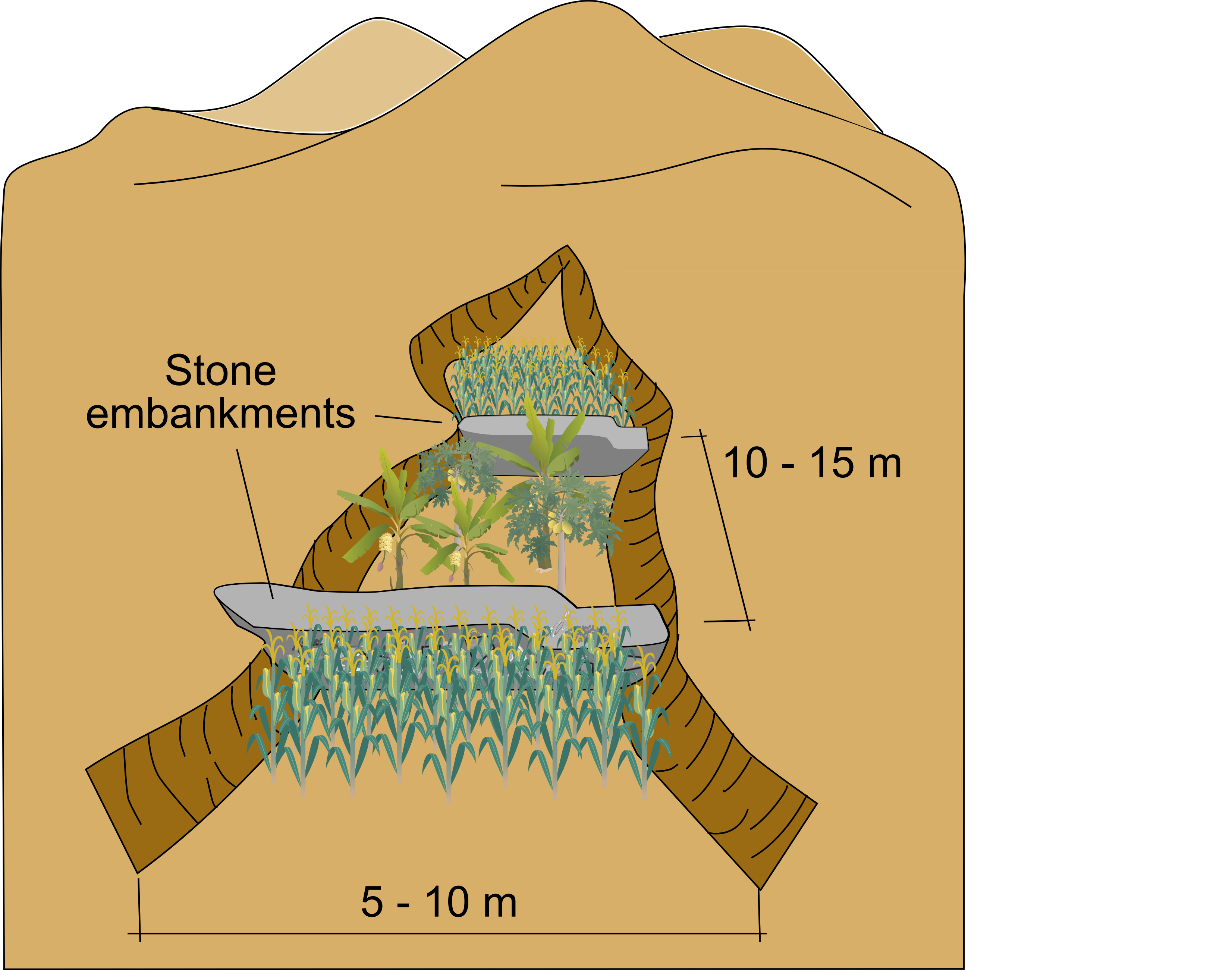 6. Name at least three benefits and disadvantages of macrocatchment harvesting!

8. Which water harvesting technology is illustrated in the graphic below (showing the applicability of the method)? (Image: Mekdaschi & Liniger 2013)

9. Why is it impossible to harvest 100% of the rainfall on a rooftop (runoff coefficient)?

A _______ is an earth embankment with a channel constructed across the _______ at a fixed vertical interval and at an acceptable horizontal slope. They are constructed to reduce _______, to remove excess _______ water, and to retain the maximum amount of _______ for crop production. It's both: a _______ and _______ conservation measure. In mountainous areas, farming of hillsides would be nearly impossible without _______; in dry regions, they increase plant available water storage and groundwater recharge.

11. On a hilly land of 15 % slope a level bench terrace of 2.5 m vertical interval is proposed to be constructed. Calculate the following parameters of the terrace: a) width, b) earthwork and c) area lost. Use the following equations. (modified after Awulachew et al. 2009)

You can determine the vertical interval (VI) of terraces, using the following formulae (terrace cut slope of 1:1):

A variety of equipment is available for terrace construction. Terracing machines include the bulldozer, pan or rotary scraper, motor patrol and elevating grader. Smaller equipment, such as disk ploughs are suitable for slopes less than about 8 %, but the rate of construction is much less than with heavier machines. The earthwork involved during construction of level bench terraces can be computed using the following relationship:

Bench terracing involves the loss of cultivable area due to terrace slope and its construction. It can be calculated using the following relationships:

13. The Atacama Desert in South America is one of the Earth’s driest regions. What kind of water harvesting measure would you prefer to supply an isolated village with freshwater if the precipitation is less than 100 mm? Name at least two reasons for your decision.

14. What water harvesting technology is shown below? Explain the principle!

15. Assign the right irrigation methods to the following pictures. 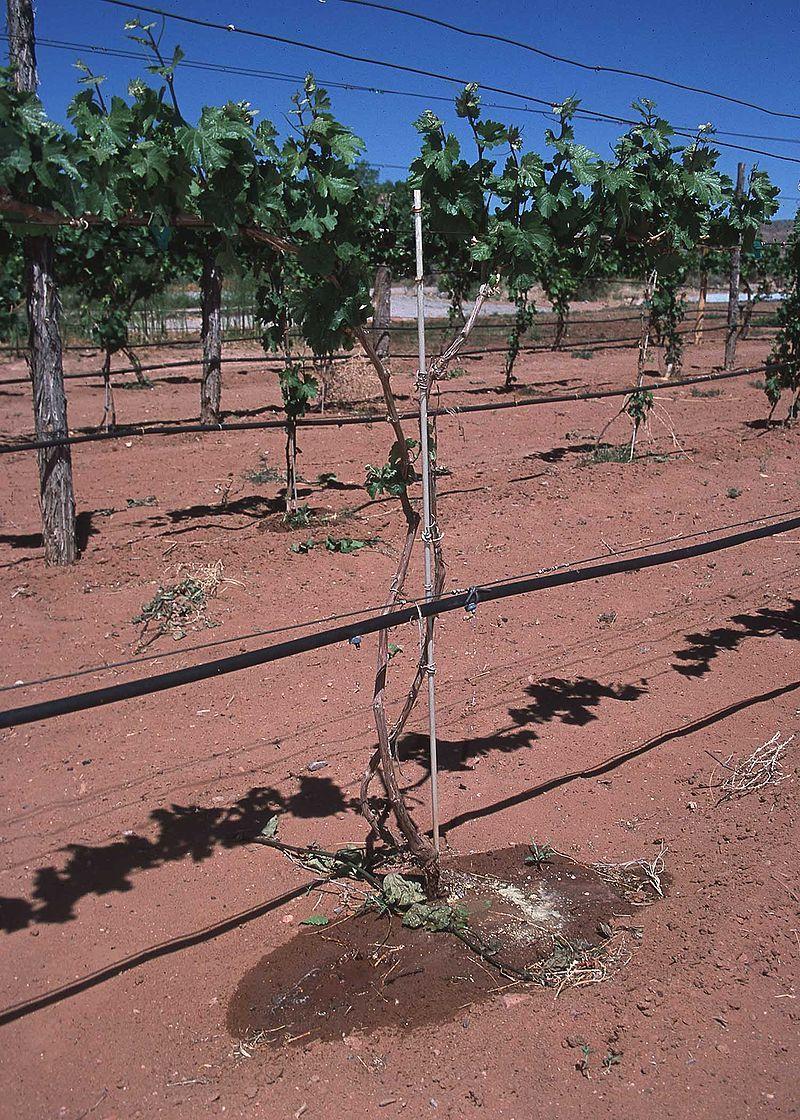 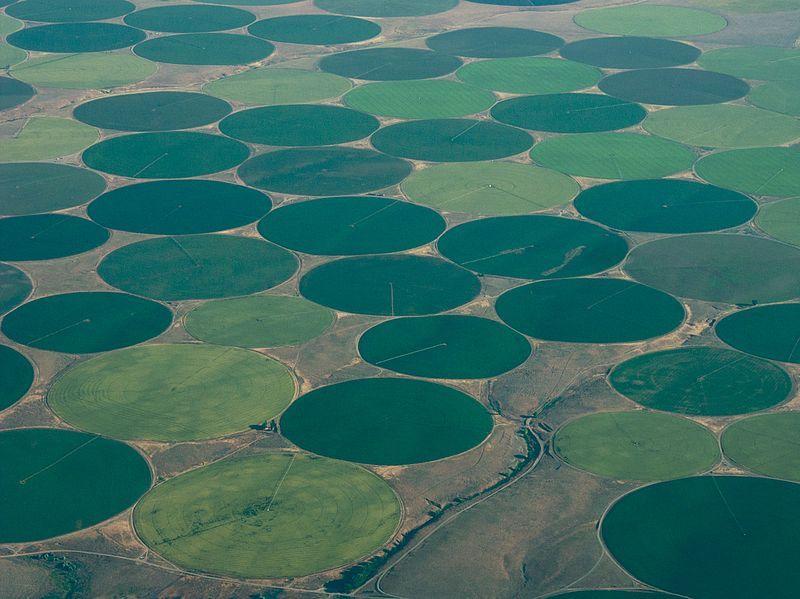 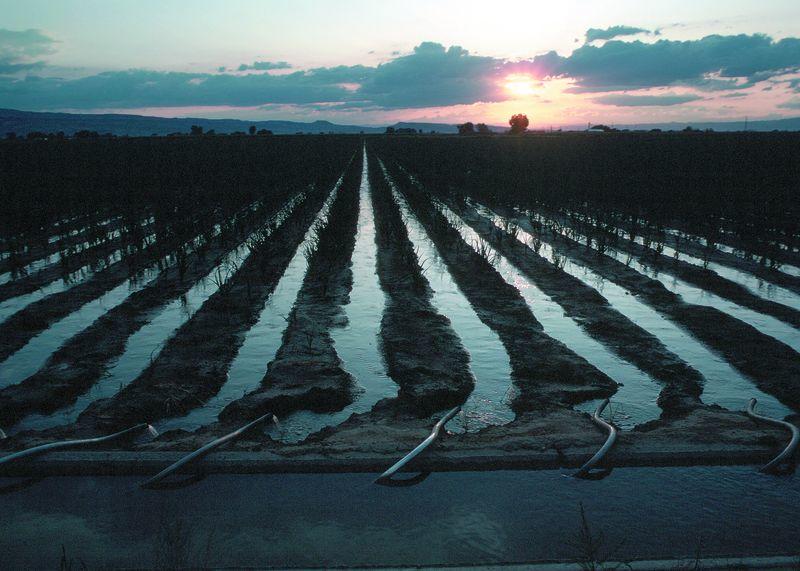 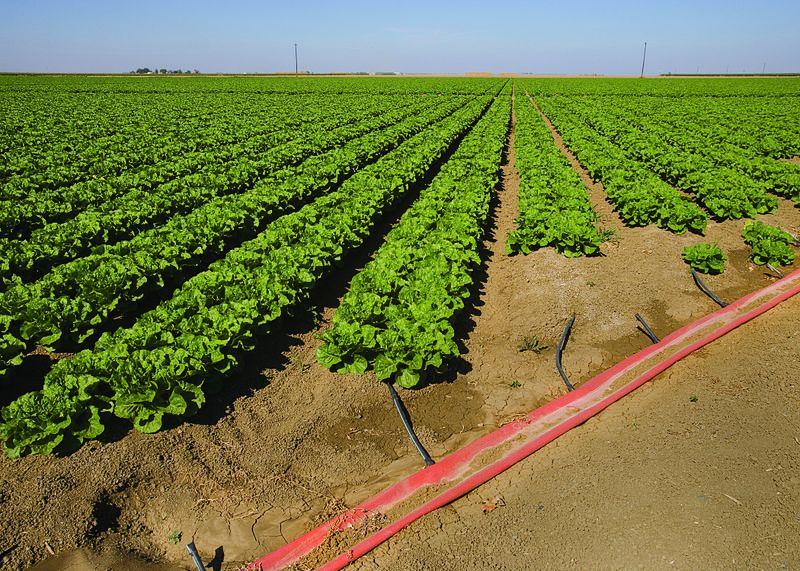 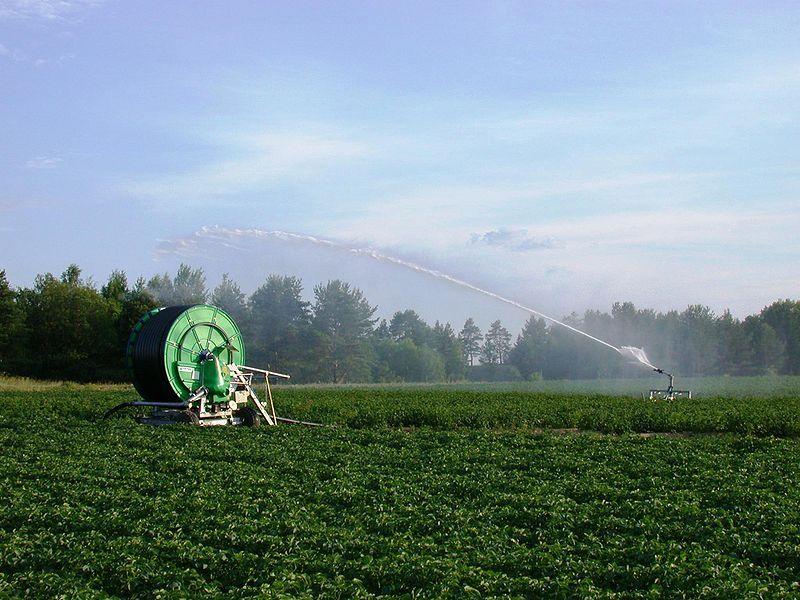 16. Name at least three advantages and disadvantages of drip irrigation!

17. What are the consequences of unregulated discharge of wastewater? Name at least four.

18. An estimated _______ of all wastewater in developing countries is discharged untreated directly into rivers, lakes or the oceans. Choose the right answer.

19. What is the difference between black and greywater?

20. Industry has a primary responsibility to reduce the production of toxic waste. (True or false?)

22. Which of the following sentences is correct? Choose the right answer.

23. What are the five different superior pollutant groups in wastewater?

24. In which areas are on-site treatment facilities preferably used and why.

25. What kinds of on-site treatment units are shown in the two graphics below and how do they operate? (Images: Tilley et al. 2014)

26. Wastewater treatment plants utilize up to four treatment steps. Which are they? Give a short description to each of these steps.

27. What is “land based treatment” and on what does the technique relies on?

28. “Land based treatment” is applied to unlined basins in cycles of flooding and drying. On what does the cycle depend on? Choose the right answer.

29. Constructed wetlands are based on natural wetlands, which act as a water filter and purifier using different processes. A constructed wetland consists of a gravel bed in which wetland species are planted. How and when are nutrients taken away from the wastewater?

30. Which two types of constructed wetlands are shown in the following two illustrations and what are the differences? (Images: Tilley et al. 2014)

31. What are the advantages of constructed wetland? Name at least three.

32. What should be the first option when considering a sanitation intervention? An on-site or an off-site treatment system?

33. Under which circumstances is it necessary to build an off-site treatment system?

34. Once the decision has been made to implement an off-site treatment facility a _______ system becomes necessity. Fill in the blank.

35. What are the advantages of on-site and off-site treatment system? Name at least three each.

36. What should be the driving force for conveying wastewater and stormwater in a sewerage?

37.What is the key difference between a combined and a separate sewerage system?

38. The treatment of _______ wastewaters before discharge to the sewerage is also extremely _______ in preventing pollutants from entering the wastewater and stormwater systems. Fill in the blanks.

39. How can stormwater be collected and treated besides using sewerage systems?

40. The characteristics of sludge vary widely from relatively fresh faecal materials to sludge which has undergone bacterial decomposition. Sludge may be contaminated with pathogens, heavy metals and other pollutants but sludge can also contains essential nutrients like nitrogen and phosphorus which are potentially beneficial as fertilisers for plants. What is meant by the process of stabilisation and under which conditions can it be achieved?

41. What are biosolids and which requirements should be considered?

42. What are the two methods of how sludge, which cannot be reused, should finally be disposed?

Wastewater management refers to the process in which _______ and _______ are managed from the point of _______ to the point of use or ultimate disposal. The hardware answer to wastewater management are _______ systems. These systems are a combination of different functional units that together allow _______ and reusing or disposing the different waste flows from households, institutions, agriculture or industries in order to _______ people and the environment. The systems are designed to address the whole _______ cycle as well as the _______ cycle, from the toilet where wastewater is _______, over the collection, treatment up to reuse or _______. Wastewater is already being used for irrigation and fertilization and can continue to expand this role, particularly for peri-urban or urban _______ and home gardens. But _______ water efficiency in the entire water chain including before water enters the cities, and _______ production of wastewater should be a primary goal throughout the entire _______ scheme. Currently, most of the wastewater _______ in many of the fastest growing cities is either non-existent, inadequate or outdated and therefore entirely unable to keep pace with the _______ of rising urban populations. Experience has shown that _______ investments done in the right manner can provide the required returns. However, _______ a solution will require not only investment but also carefully integrated national to municipal water and wastewater _______ that addresses the entire water chain – drinking water supply, production and treatment of wastewater, ecosystem management, agricultural efficiency and urban planning.

45. Restoring a river to its natural state leads to several benefits. Name three of them!

46. The picture below shows the city of Dresden during a high water of the Elbe River. Which temporary measures to protect cities against floods do you know? Name at least three.

48. The picture below shows a dyke. Are the following statements true or false?

Embankments cannot guarantee absolute flood prevention, they can be designed to only provide a moderate level of protection.

Protecting the environment against floods by constructing of embankments leads to an increased biodiversity.

49. Try to solve the crossword puzzle! (Don’t use blanks between two words.)