Flash Floods in Mangala Valles and Minio Vallis on Mars

The latest images acquired using the High Resolution Stereo Camera (HRSC) on board the ESA Mars Express spacecraft show a region south of Minio Vallis. The region is located at the south-western Tharsis bulge and is part of the large Mangala Valles outflow channel system on Mars. The views shown here were created by the Planetary Sciences and Remote Sensing group at Freie Universität Berlin. The systematic processing of the HRSC image data is carried out at DLR. 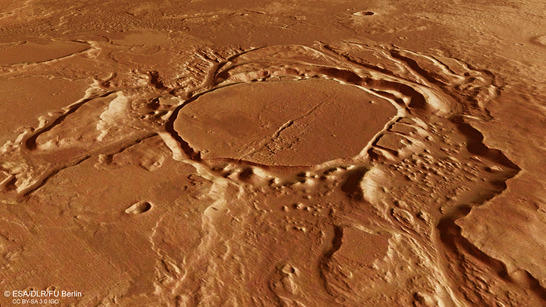 During Mars' geological 'Middle Ages' – the Hesperian Period – which began 3.7 billion years ago and lasted until approximately 3.1 billion years ago, strong volcanic activity was present on our neighbouring planet. Volcanoes spewed low viscosity lava that poured out in masses over the surface and gave rise to extensive plains. Rising magma prompted the crust to bulge upwards, causing tectonic tensions to develop as a result of the volcanic activity. In many places, the Martian crust broke up and produced fissures or graben systems such as Valles Marineris. The Tharsis region was formed during this period – an area as large as Europe that bulged out into a shield several thousand metres high as a result of volcanic processes. At the southwestern slope of the Tharsis region lies the largest valley system, Mangala Valles, as well as the smaller Minio Vallis. The latest images acquired by the High Resolution Stereo Camera (HRSC), operated by the German Aerospace Center (Deutsches Zentrum für Luft- und Raumfahrt; DLR) on board ESA’s Mars Express spacecraft, show the central part of Mangala Valles. This was probably the source of enormous masses of water that flowed out, heading over the Martian surface and carving out Minio Valles in the process. 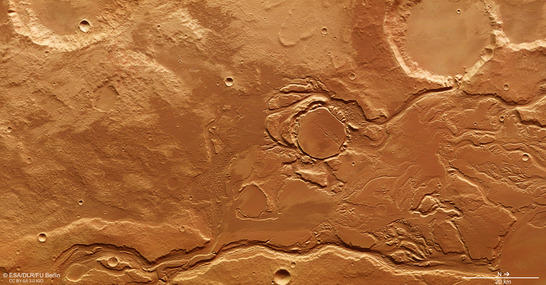 Volcanism and its consequences

But how did these masses of water arise? Mangala Valles is located in an east-west fault zone several hundred kilometres. During an episode of increased volcanic activity, hot, molten rock could have reached the surface during the formation of the Tharsis bulge, melting any existing ice. The resulting masses of water then flowed out to several hundred kilometres north of Mangala Vallis, forming the Mangala Valles and Minio Vallis outflow channels. The word Mangala is 'Mars' in Sanskrit. The name was proposed by the renowned astrophysicist Carl Sagan. India's Mars spacecraft Mangalyaan ('Mars craft'), which has been observing Mars from orbit since 24 September 2014, is also named after it.

The masses of water flowed over multiple impact basins and craters that were already partially or completely filled with sediments, and flowed through numerous rilles in a northerly direction towards the Amazonis Planitia lowlands. Such an impact basin with a drainage channel is located in the upper right corner of the image in the plan views (north is to the right in the images). The crater has a diameter of 28 kilometres. 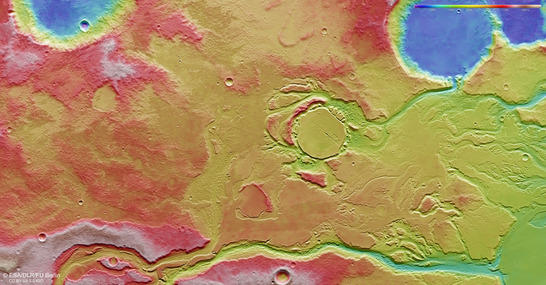 A somewhat smaller and older impact crater can be seen in the centre of the image – it was once filled with material that eroded later on. Chaotic terrain emerged at its rim; this type of terrain is found elsewhere on Mars. It is characterised by the random arrangement of blocks of the surface material of varying sizes and elevated areas similar to mesas. Chaotic terrains result from the release of underground water and the subsequent collapse of the surface, during which the terrain blocks fall in on themselves and give rise to a 'chaotic' landscape. The existence of such a region at this location strongly suggests the presence of large amounts of ice underground, and that there were different stages of flooding. 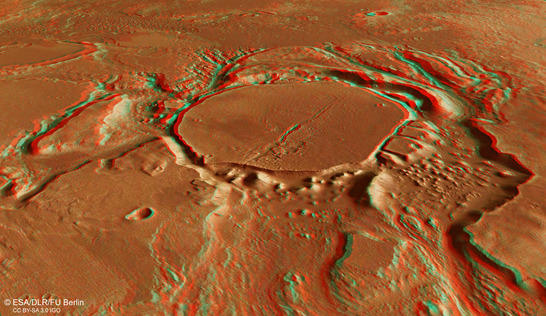 Sporadic water activity up until the recent Martian past

A deep valley meanders through the landscape in the lower (eastern) half of images 2, 3 and 5. This landscape features many different surface features, such as flattened slopes with terraces along the sides of the valleys and streamlined islands. Chaotic terrains appear here as well – these are located in the direction of flow of the water masses through the valley. The size and frequency distribution of the impact craters suggest that Mangala Valles was formed in the Hesperian Era and that water activity existed sporadically until the Amazonian period – the most recent geological era on Mars – which began about 3.1 billion years ago. 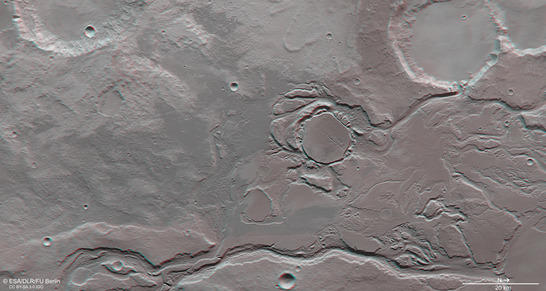 The image was acquired by the HRSC on July 12, 2015 during Mars Express Orbits 14,622 at 7 degrees south and 208 degrees east. The ground resolution is about 16 metres per pixel. The color plan view (image 2) was created using data from the nadir channel, the field of view of which is aligned perpendicular to the surface of Mars, and the color channels of the HRSC. The oblique perspective view (image 1) was generated using data from the HRSC stereo channels. The anaglyphs (images 4, 5), which provides a three-dimensional view of the landscape when viewed using red-green or red-blue glasses, was derived from data acquired by the nadir channel, one stereo channel and the color channels of the HRSC. The color-coded plan view (image 3) is based on a digital terrain model of the region, from which the topography of the landscape can be derived.