On our neighbouring planet Mars, it is mainly wind – through its force and the dust and sand particles it carries – that shapes the terrain structures, wearing them away over the course of millions of years. In the early history of the Red Planet, flowing water also contributed to this. It can be seen, for example, in the numerous craters with varied degrees of erosion in the Arabia Terra region, represented in these images acquired using the High Resolution Stereo Camera (HRSC), on board the European Mars Express spacecraft. The views shown here were created by the Planetary Sciences and Remote Sensing group at Freie Universität Berlin. The systematic processing of the HRSC image data is carried out at DLR Institute of Planetary Research Berlin-Adlershof. 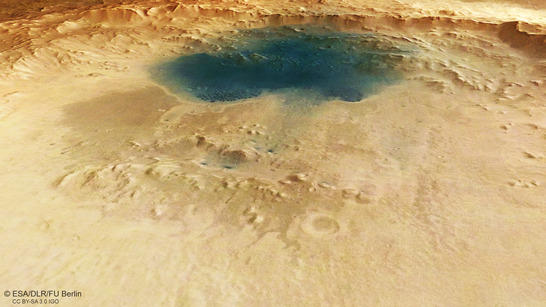 The region is located some 250 kilometres east of Mawrth Vallis, a valley in which clay minerals have been identified on both sides and in the wider environment by the OMEGA spectrometer on board Mars Express. These are typically produced by the erosion of basaltic, volcanic rock due to the effects of water. Arabia Terra forms the transition zone between the northern lowlands and the southern highlands. In a joint project, DLR, the Freie Universität Berlin) and the University of Hanover have produced contiguous image mosaics based on HRSC image data, and have recently used the MC-11 (East) map sheet to compute an 1800 by 1300 kilometre topographical image map of Arabia Terra. There are also deposits of clay minerals in the wider environment, which makes this a preferred region for future rover missions.

The images published here show a collection of multiple craters of varying ages and at various stages of erosion. One very large impact crater, some 70 kilometres in diameter and with a fairly steep, towering crater rim, dominates the left (southern) half of the image. A large field of black dunes has built up on the crater floor. The dark material in these dunes is likely to have originated from the erosion of dark volcanic rock such as basalt, which has been carried there by the wind.

On the upper right edge of the crater (images 2, 3 and 4), three structures can be seen that cut into the flank and are reminiscent of sapping valleys. These form when ground water escapes under the edge of the terrain. The caverns created by this collapse and the eroded material is transported away along the course of the valley by the flowing water. At the lower edge of the larger valley at its outflow, there is a three by four kilometre fan-shaped deposit; this is not easy to see and is most clearly visible in the color coded digital terrain map (image 3). It is reminiscent of the sediments in a river delta and most probably consists of eroded material that has been transported out of the three small valleys by water.

Directly to the right near the large impact crater is a smaller, very heavily eroded crater, the interior of which has been filled with sediments. Despite this, several traces of the crater rim can still be observed. Further to the north (right in images 2, 3 and 4) is a similarly large impact crater approximately 30 kilometres in diameter, which has been completely filled with sediments and harbours a black dune. Its crater rim has almost completely disappeared and its circular outline can only be seen in the color coded digital terrain map (image 3).

A river as wide as the Mississippi

To the right, below this crater, is a valley with a shape very similar to dendritic river courses on the Earth. Such valleys that wind through the landscape are called ‘meanders’ after a river in Asia Minor. Its dendritic, snaking course is reminiscent of rivers on Earth. The section of the valley that can be seen in these images varies between one and a half and four kilometres in width, and so is comparable with the Mississippi. The river runs 500 kilometres northwards and flows out into Acidalia Planitia, a plain that forms part of the northern lowlands of Mars.

This region of the 'old' Mars highlands shows numerous traces of the eventful history of Mars. In it, many different developments and changes to the surface of Mars that took place in the early history of the planet can be very clearly traced. Rivers crossed the landscape and must have transported enormous volumes of water northwards periodically. Impact craters have been filled with sediments, and their crater rims and ejecta blankets have been worn away by the power of the water and the persistent wind through the ages.

The image was acquired by the HRSC on October 25, 2014 during Mars Express orbit 13,728 at 25 degrees north and 349 degrees east. The ground resolution is about 20 metres per pixel. The color image (image 2) was created using data from the nadir channel, the field of view of which is aligned perpendicular to the surface of Mars, and the color channels of the HRSC. The oblique perspective view (image 1) was generated using data from the HRSC stereo channels. The anaglyph (image 4), which provides a three-dimensional view of the landscape when viewed using red-green or red-blue glasses, was derived from data acquired by the nadir channel and one stereo channel. The color-coded topographic view (image 3) is based on a digital terrain model of the region, from which the topography of the landscape can be derived.