The fascinating aspect of this huge challenge is that I have to work with a lot of different techniques that operate on different temporal and spatial scales. I have the amazing opportunity to work with a large number of experts from different fields of geology and learn from them and their approaches to problem solving. These fruitful cooperations provide a very stimulating environment – however, it can sometimes be quite a challenge to stay on top of things in such a diverse group of people from so many different disciplines.

My PhD project is supervised by Anne Bernhardt and Ed Sobel (Uni Potsdam) and focuses on the interplay between tectonically induced exhumation events in the hinterland, sediment transport from the hinterland to the sedimentary sink and the recording of the exhumation event from the hinterland in the sink. The details of how sediment sources and sinks are linked by a sediment-routing system that transfers, buffers, ‘shreds’, delays, or amplifies environmental signals over geological timescales (>2 Ma) are poorly understood. I am investigating the source-to-sink signal propagation of three well-known exhumation events in the Oligocene/Miocene European Central and Eastern Alps, the exhumation of the Lepontine Dome, the exhumation of the Tauern Window and the erosion and redeposition of the Augenstein Formation. The sink for the sediments generated by these events is the Upper Austrian Northern Alpine Foreland Basin (NAFB, Fig. 1). In order to investigate the signals from the hinterland, we need excellent stratigraphic control of the sediments in the sink. 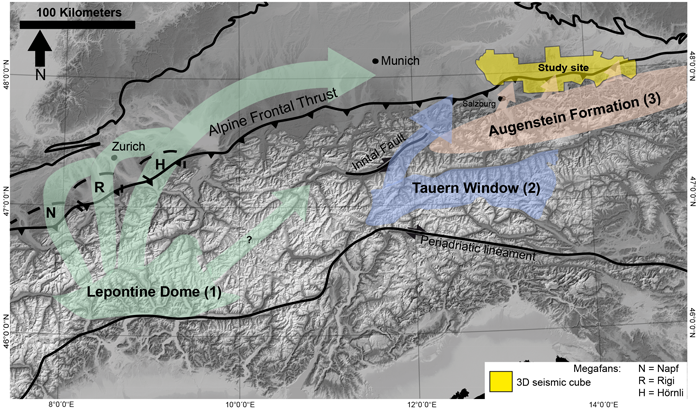 Fig. 1: Map of the Central and Eastern Alps and the Northern Alpine Foreland Basin. The positions of the exhumation events in Oligocene/Miocene times are highlighted, as is the depositional sink.

The first part of my PhD is therefore concerned with reevaluating and extending the stratigraphic framework of late Oligocene/early Miocene sediments in the Upper Austrian NAFB. To do so, I collaborated intensely with Gero Fischer, Gerald Auer (JAMSTEC, Japan) and Patrick Grunert (University of Cologne). The eastern NAFB experienced deep-marine conditions during this time and sedimentation was controlled by a gravity-flow dominated channel (Fig. 2) that funneled sediments from the west further to the east and deposited the Lower and Upper Puchkirchen Formations and the Hall Formation. The channel had a wide northern and steep, tectonically active southern slope. We combined benthic foraminifera and geochemistry (TOC, S, CaCO3) analysis for the identification of lithostratigraphic boundaries, calcareous nannoplankton and stable carbon isotopy (δ13C) of bulk sediment for chronostratigraphic information. As the sediments are nowadays buried under younger ones, we sampled wells from the industry and connected their information with a large 3D seismic-reflection data set. The samples and the 3D seismic data set are provided by the RAG Austria AG, Vienna.

Figure 2 illustrates the stratigraphic problems that appear in such a dynamic environment. The channel created a highly variable, erosive paleoenvironment with significant lateral biofacies changes. These changes impacting the correlation across the channel based on the benthic foraminifera and geochemistry analysis. Nevertheless, we were able to update and extend the stratigraphic framework of the basin and put age brackets around the deepening and the filling up of the foreland basin. This has a major influence on our geodynamic understanding of the eastern NAFB during Oligocene and Miocene times. 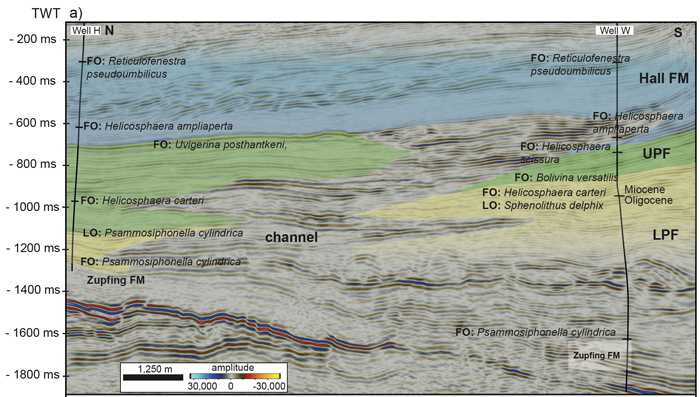 Fig. 2: N-S cross section through the Upper Austrian NAFB with the channel in the central part and two sampled wells in the northern and southern part. Note the different positions of the beginning of the Upper Puchkirchen Formation (UPF) in Well H and W, which are likely to be have been caused by the highly variable paleoenvironments (Figure from Hülscher et al., 2019).

We used the results from our new stratigraphic framework to calculate sediment-accumulation rates (SAR) for discrete time intervals by using the 3D seismic-reflection cube and well data. Therefore, I intensively mapped in the 3D seismic-reflection cube and built a 3D model out of these surfaces, which I then modelled with data from well logs to calculate deposited masses. Our results highlight that the channel in the basin created an efficient sediment transfer system in the basin that funneled sediments further to the east. For further results of our study, please see our paper “Selective recording of tectonic forcings in an Oligocene/Miocene submarine channel system: Insights from new age constraints and sediment volumes from the Austrian Northern Alpine Foreland Basin“.

The second part of my doctoral study is focused on the provenance of sediments in the basin, with a focus on the heavy minerals, especially apatite. In the last couple of years geochemical analysis of apatite evolved into a very powerful provenance tool. We combined geochemical, U-Pb geochronology, Nd isotopy analysis on single grains from the basin to constrain their provenance. In this part of the project I cooperated with David Chew (TC Dublin) and Ian Millar (BGS, Keyworth). The samples were taken from drill cores of the sand-rich overbank deposits of the basin (Fig. 3, 4).

Fig. 3: 3D Seismic cross section (N-S and W-E) through the Upper Austrian NAFB with the channel and the wide overbanks to the north. Note the position of the drill core on the overbanks, where stratigraphic control is very good but sand-sized sediment is less abundant than in the channel. 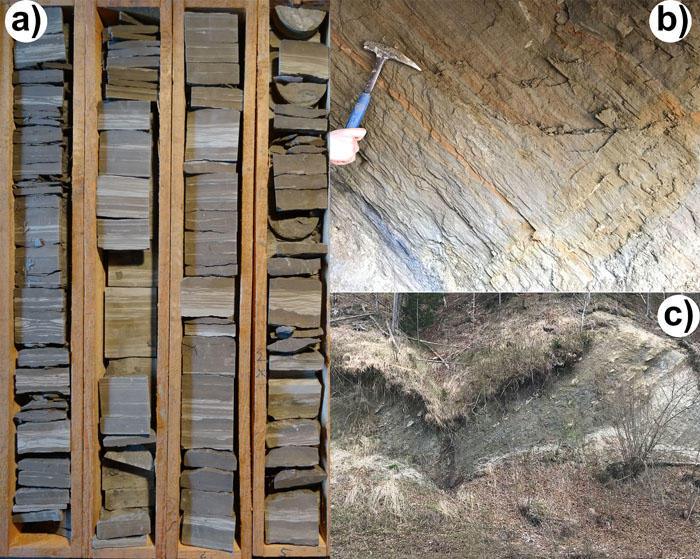 Using the 3D seismic-reflection data set, I correlated the sampled cores with the wells from which we obtained our stratigraphic information. The results of the analysis were statistically evaluated by using Python programming language and compared to a geochemical data set compiled from scientific literature by using a principal component analysis and a support vector machine.

In the third part of the project, I counted fission tracks on the same apatite samples which were then used for the geochemical and geochronological analysis. I was supervised by Ed Sobel in fission track counting. In total, I counted 706 single apatite grains. In the future we will combine these new results with results from published detrital apatite fission track data to calculate a signal propagation rate.

Our results will shed light on unsolved problems regarding the evolution of the Alpine chain. We are cooperating closely with colleagues in the 4DMB program.

In the course of this project, I performed a provenance study of the heavy minerals in the Upper Rhine Graben (URG) by using main element geochemistry on garnets and amphiboles. Since the last change in the drainage system of the northwestern Alps garnets, green hornblendes and epidotes, the so-called “Alpine Spectrum”, dominate the heavy mineral assemblage in the Rhine and the URG. Different authors have shown that a similar heavy mineral assemblage – with the exception of epidote – is delivered from the flanks of the URG, the Black Forest and the Vosges Mountains. I investigated the possibility of a mixture from different sources for the “Alpine spectrum”. For that purpose, I sampled three rivers from the Swiss Molasse Basin, three rivers from the Black Forest and one from the Vosges Mountains. Furthermore, I took samples from two boreholes from Rhine terraces, one from the north and one from the south in the URG, which represent the sinks, and then added a sample collected from a borehole in the Neckar fan in the URG. I picked ~850 garnets and ~330 amphibole grains and analyzed the main elements for each grain. This data set is the first of its kind in this area and was analyzed using discrimination diagrams in case of the garnets and TiO2/SiO2 plots for amphiboles. My results indicated that the garnets >250µm have a rather local source from the Black Forest and Vosges, whereas the garnets <250µm have an alpine provenance. The amphiboles are predominantly delivered from the graben shoulders.